I Went to the Zoo

- April 30, 2019
It's been very many years since I have visited a zoo, and I couldn't even tell you which zoo it might have been, but I had heard anecdotal  information  that suggested the Santa Barbara Zoo had good landscaping with excellent plants  and was worthy of a visit . I'm always up for  some plant viewing so I  added the zoo  to my road trip agenda. A bit of googling revealed that this particular zoo is well regarded, is small, provides naturalistic settings for the animals and it was only ten minutes from my hotel .

There were a lot, really a lot,  of children there, and the facility had numerous family-friendly features including a large park like play area , picnic areas, Giraffe feeding and a zoo train among other attractions.  Because I am notoriously child-phobic I spent quite a bit of time positioning myself  as far away as possible from the hordes. If I were to visit again , it would be very early spring, on a weekday, right at opening.


This entire post will feature exactly 3 photos that include animals. I definitely had to take a pic of the Flamingos. 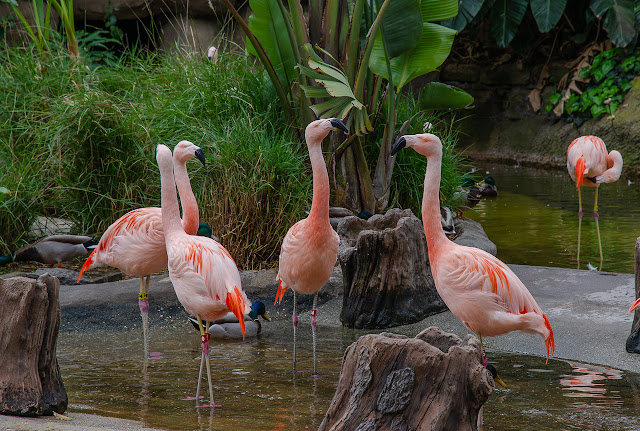 Look at this cool container..I wondered if it was open at the bottom so that the large speciman cacti could root down into the soil beneath. 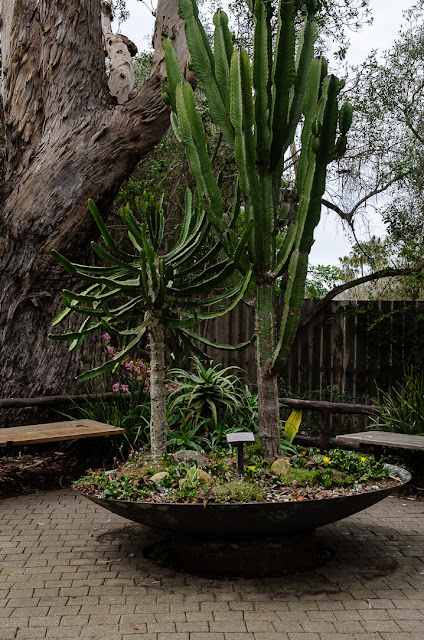 A nice grouping , and typical of many garden areas at this zoo. 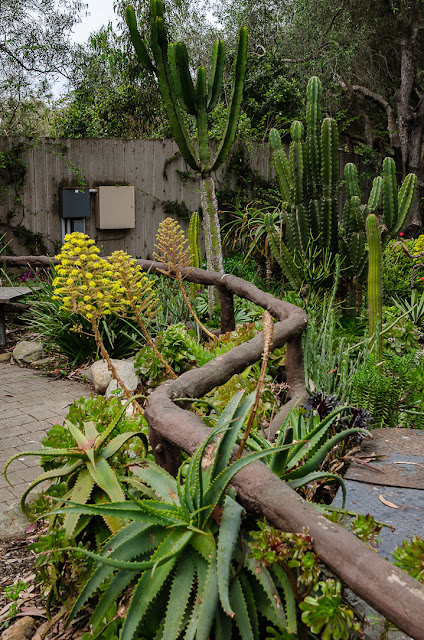 Here we have Epiphyllums growing up the trunk of palms. I imagine this is quite a sight when the Epis bloom. 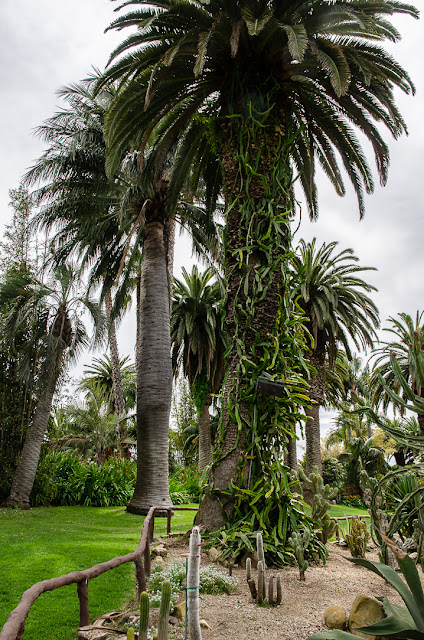 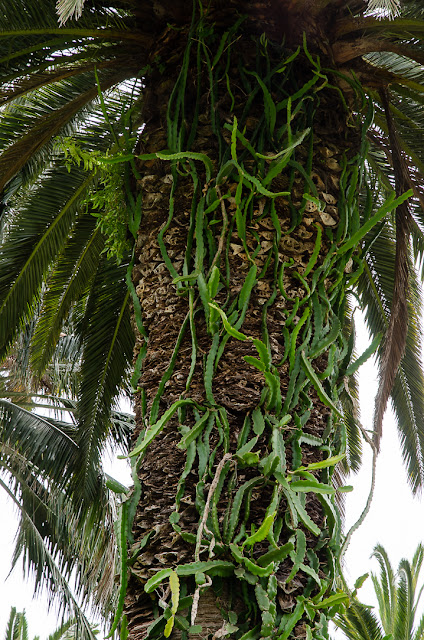 I'm always appreciative of a nice stand of Draceana Draco. 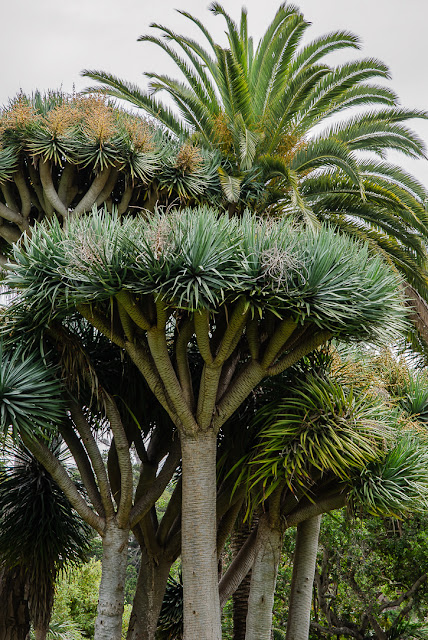 Some really nice mature cactus and succulent plantings flanked one of the paths. 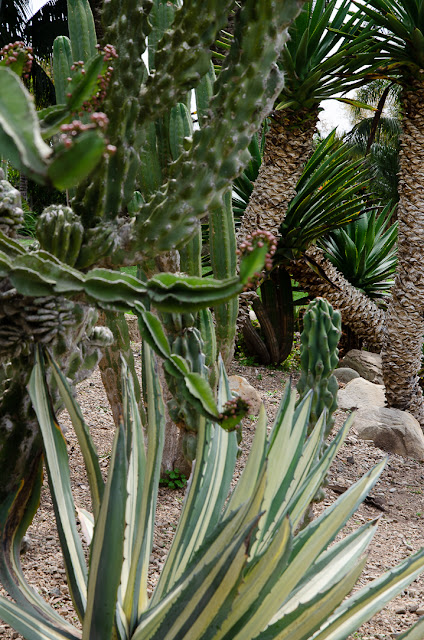 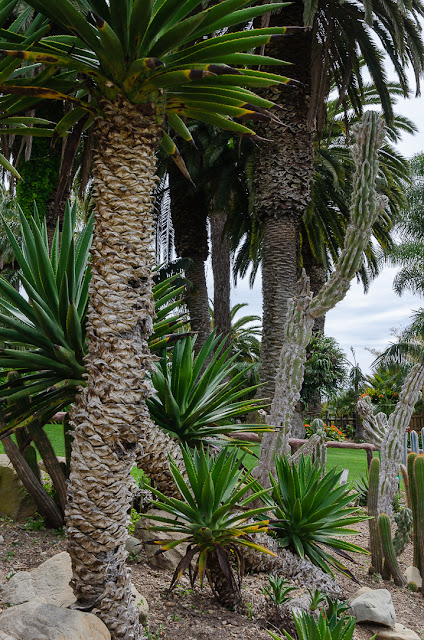 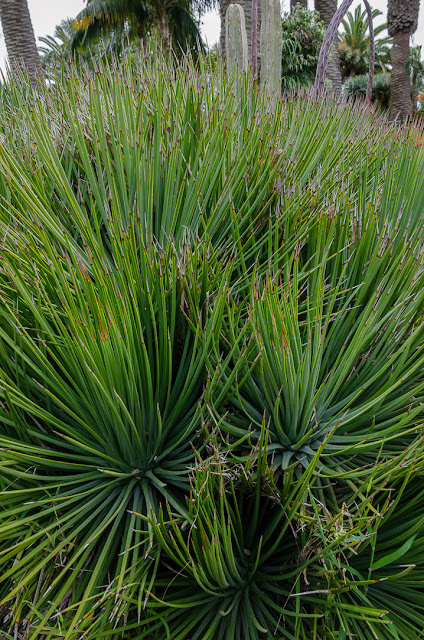 Several of the palms were hosting large-very large- staghorn ferns (Platycerium) mounted on their trunks. I wish I had tried to see and photgraph the mechanics involved here, I'll be sure to do so if and when I return to this zoo. 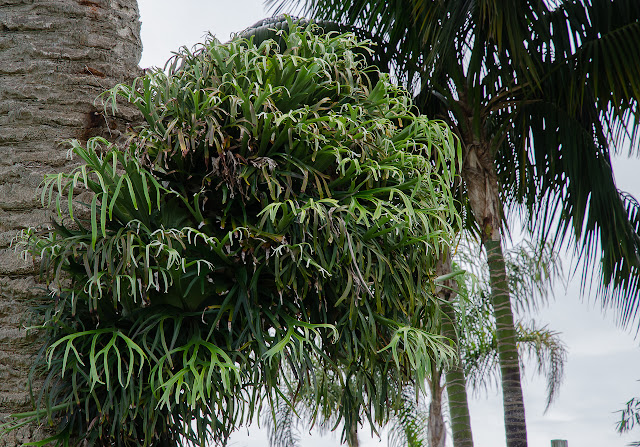 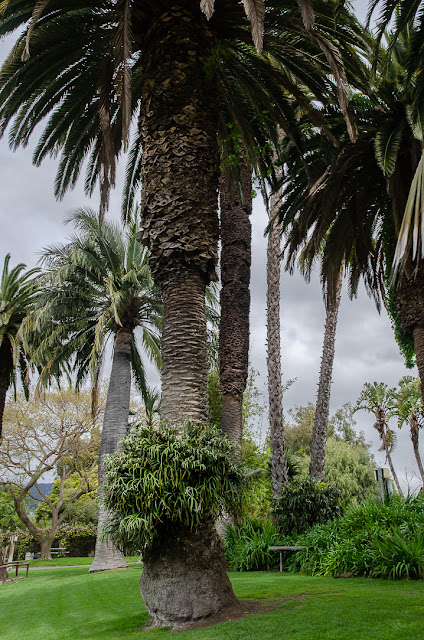 There were many palms , and  my palm ID skills are still lacking in spite of my pledge to improve. Maybe next year. 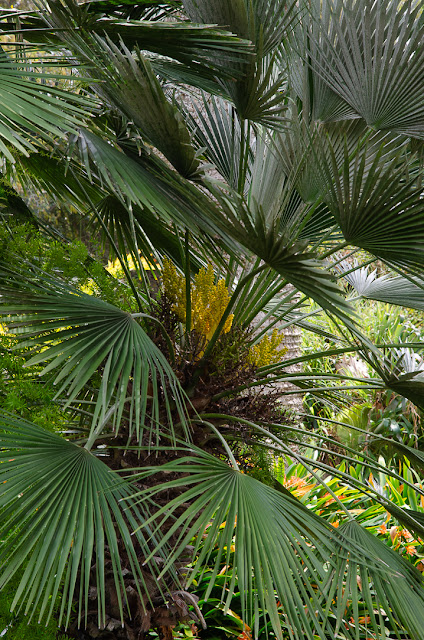 Clivias were in peak bloom just about everywhere I went. The greenery above looked really fig-like to me but I found no tags. 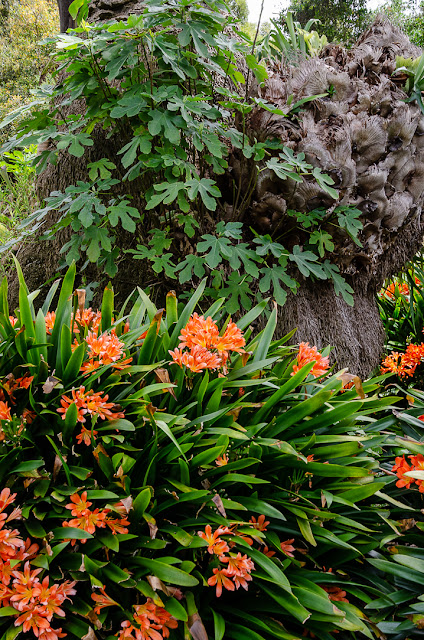 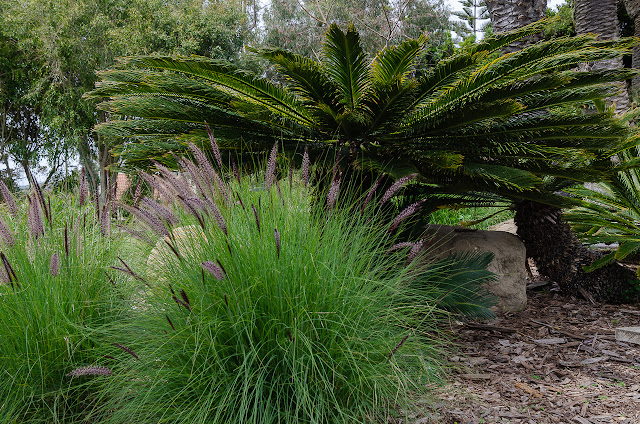 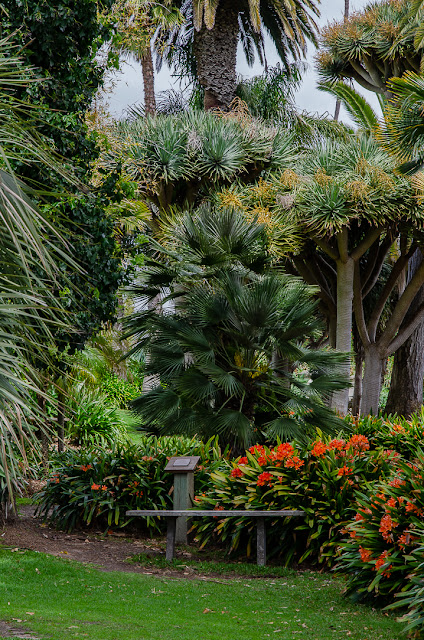 Leucospermum is now a fixture in this region. 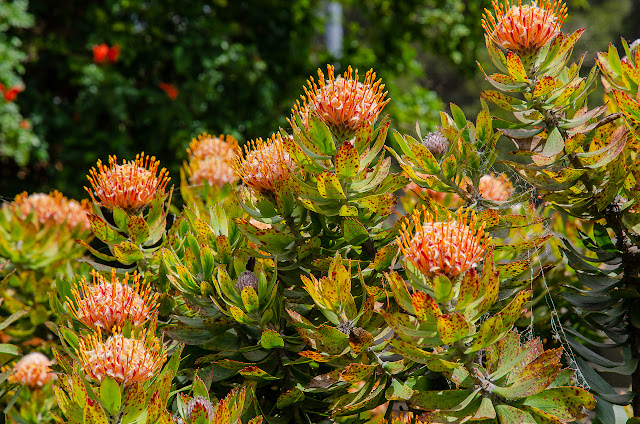 Naturally there were Agaves. 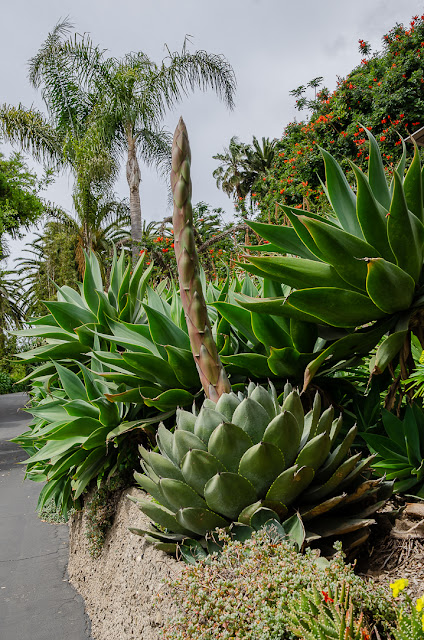 I had some regrets that I didn't spend more time in the areas that were designated for California native plants. I really appreciated that they featured our natives and though the area was relatively  small it was nicely designed , with informative signage for the non-plant savvy visitor. 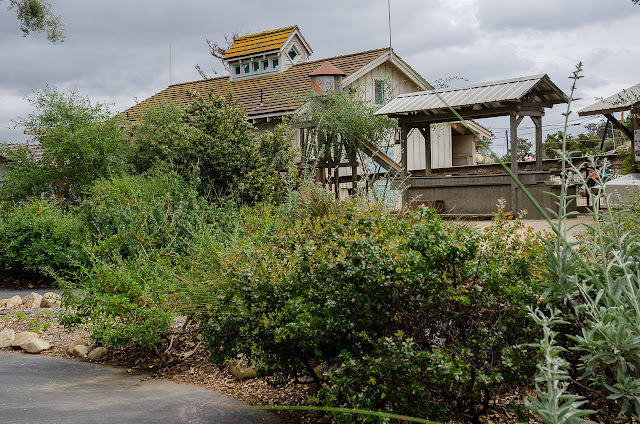 I'm always in awe of Aeonium plantings. Keeping them alive over the winter at my house is a challenge. 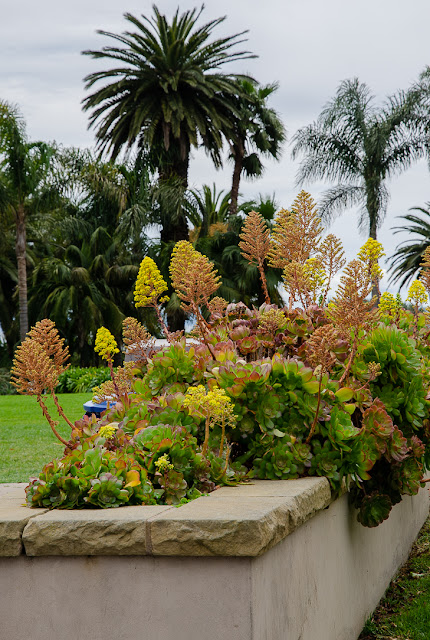 If I was a giraffe and lived at a zoo, I would definitely appreciate an ocean view. 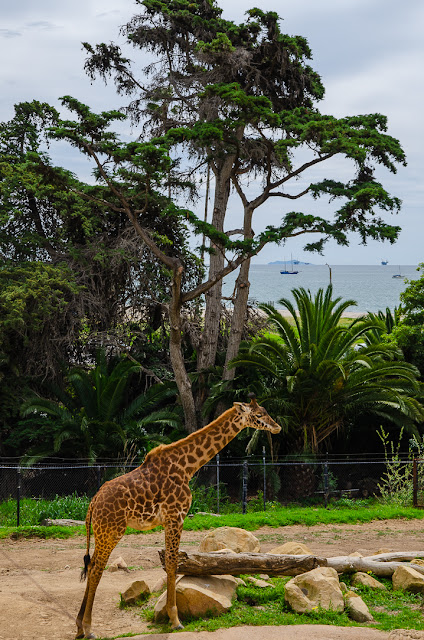 If you look center left you might see a mammal swinging along a rope .  This looked to be a white Chimp or a white Baboon- I failed to get the ID and I can't find info on the SB zoos' website. However, this guy was swinging happily through mature Eucalyptus. I saw no screens, nets or fences of any kind- 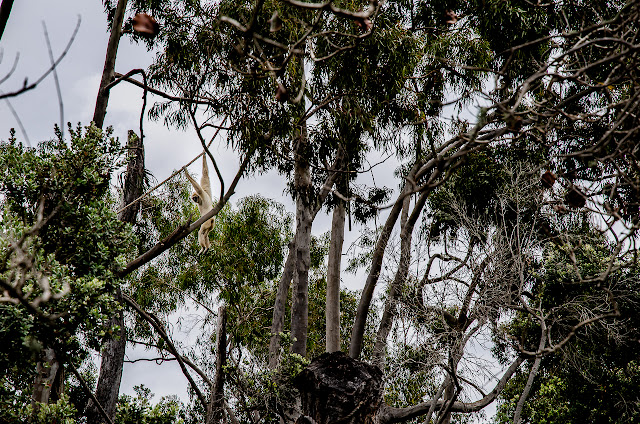 This was the scene below. I wish I had taken more photos of the environments that this small zoo has created for their animals. 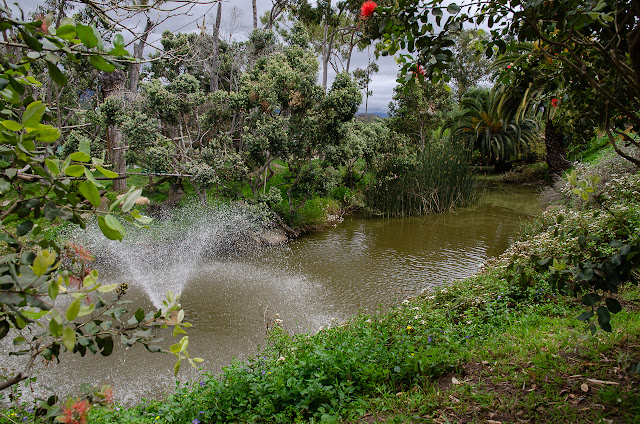 I guess my take-away from this visit was appreciation for the attempt to provide livable habitats for their animals in natural settings, including a Condor enclosure large enough  for them to fly in.  Certainly it's not like being free, but the study of these animals that is facilitated by their confinement in a zoo is important for their survival in the wild.