A Spring Report from my Garden-Shoulda Coulda Woulda.

- April 07, 2019
It has rained like mad this winter/spring, it seemed like there was hardly a dry day in February without much of a respite in March. April has opened up with a couple modest storms and splendid sunny days in between. The cool temps have extended the tulip display far beyond my expectations. 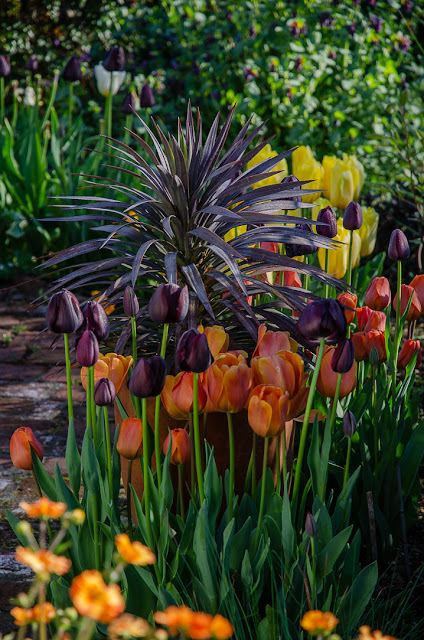 This Passiflora 'Blue Horizon' did not die back in winter-much to my surprise-and kept up the blooming as well. Hopefully this will not turn out to be one of those vine mistakes. 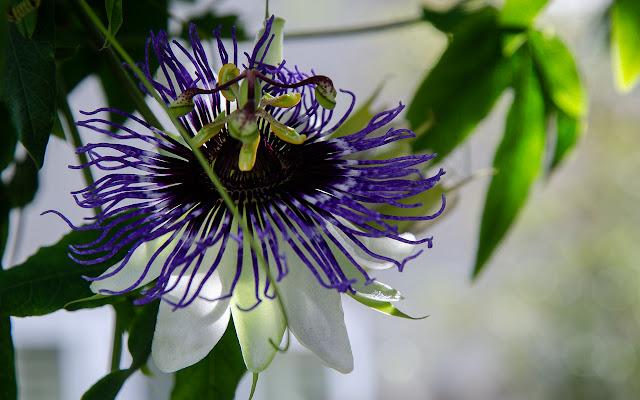 Lasy year I finally acquired a Plume Poppy (Maclaya) but I avoided planting it in the ground (I had been warned) so it was safely contained a half-wine barrel that I had placed in a spot where nothing would grow  due to root competition from my now deceased Liquidambar. Having that damn tree cut down was one of my greatest acheivements of 2018. The Plume Poppy didn't bloom for me last year but I am growing it primarily because I love the foliage.
So here is the plume poppy coming back up this spring in it's container. 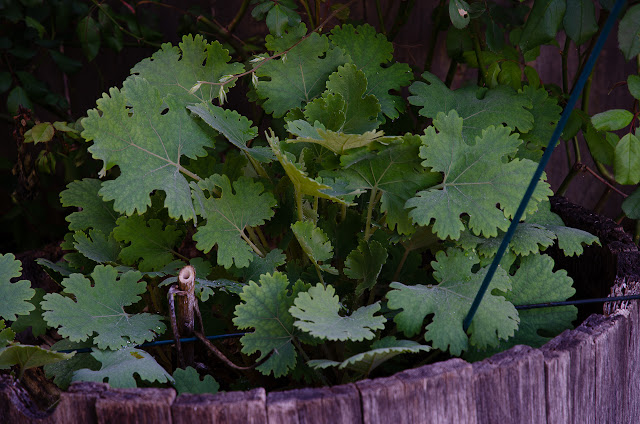 ...but oh-oh. This leads me to believe the bottom might be rotted out in this wine barrel. Or did they just escape through the drain holes ? This could be trouble. 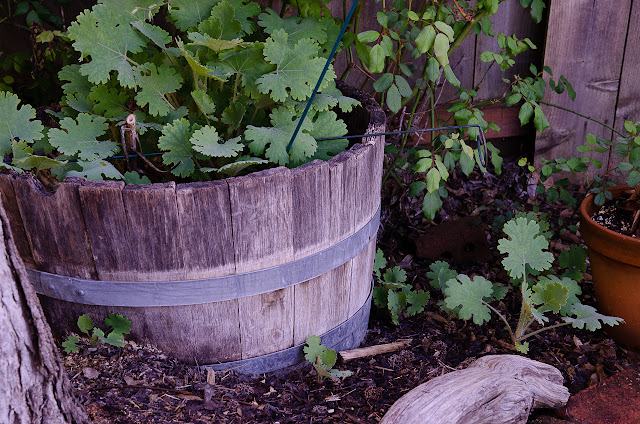 The hail damage on my succulents looks even worse now than it did in the week after the storm. Fred Ives got the worst of it in this bed, but all the Mangaves look like hell too. Not only hail damage for the Mangaves but the snail attacks were brutal-it will take months for the plants to grow out of the disfigurement, and in the meantime I will need a better strategy for next winter. 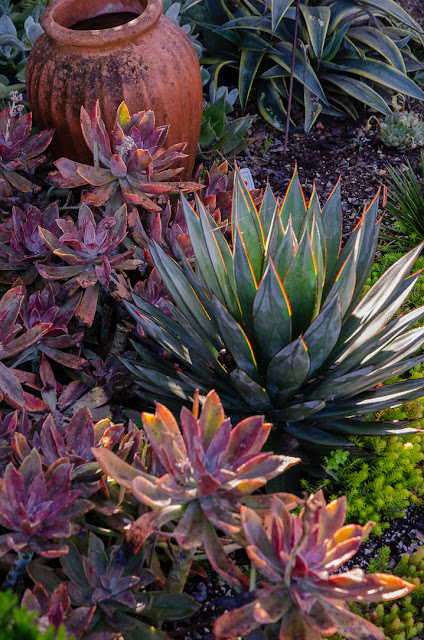 Pruning Lavender can be tricky, and I have no problem digging up and replacing those that have started to descend into woodiness. These two are both L. 'Platinum Blonde' and I really regret now that I didn't dig up plant on the left in fall, it's not looking great. Or even good. It will likely get the heave-ho as soon as I find a replacement.  I have three of this variety and it's become one of my favorites. 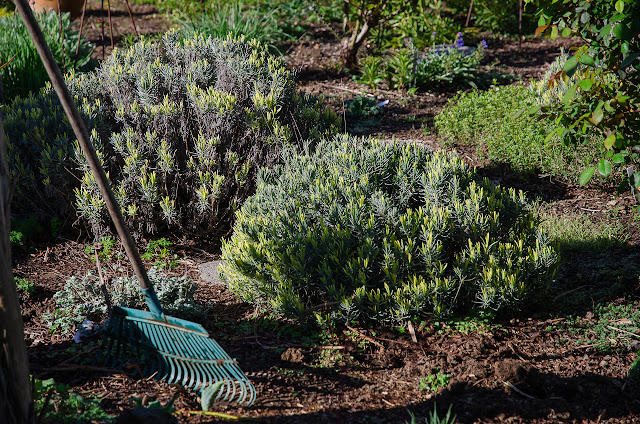 I probably should have thinned the seedlings of  Euphorbia characias  wulfenii a tad more-they are now overwhelming this area .There are Carex, Heucheras and ferns under that lime-green cloud. I did get lots of enjoyment watching them unfold during our grey late winter, but the time has come to edit. 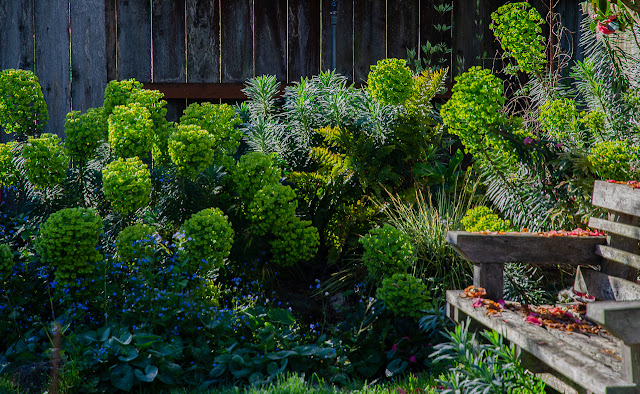 And they combo-d nicely with the bright blue blooms of the 'Jack Frost' Brunnera . 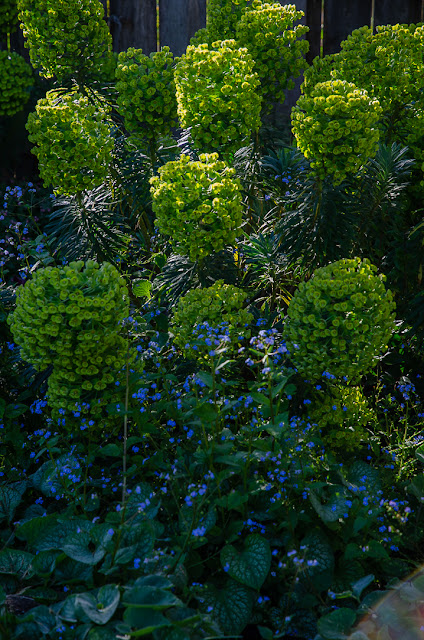 The bright grassy bit in the center left of this photo is some sort of reed grass that is living right in the middle of Chasmanthium 'Northern Lights'. Not a good look. My only way forward here is to dig the whole thing up and discard it-and since I get a few seedling each year (if it rains) from Northern Lights I can easily move into this spot. This plant has been here for several years, so digging it out will be a process. 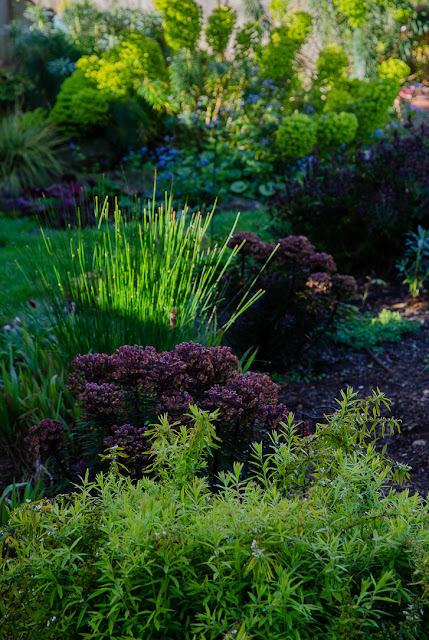 In other grass news, I have contructed a really unattractive support for Miscanthus Rigoletto. The support I made last year was also not attractive but I used discrete jute twine instead of the green rubber covered wire. It was not robust enough and in August at some point the big flop happened. It was however an improvement over the previous years. I have also added three more rebar poles and raised the height of the horizontals-they were a good foot lower last year. You can just see them near the top of the grass. The flopping happens due to the late summer sun angle change that casts shade from a nearby Crepe Myrtle. You may ask why I don't just move the grass (which I already have done once) but, I like it where it is and thus I have chosen to take ridiculous measures.  We all take those ridiculous measures upon occasion don't we ? 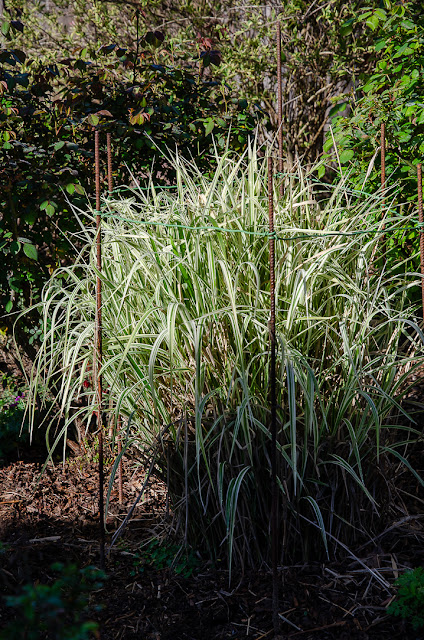 You may or may not be able to tell what this jumble is. This row of pots contain some but not all of my collection of scented Pelargoniums. I really ought to plant some of these in the ground. Many of them will die back in winter but they always return from the roots.This past winter was relentlessly rainy and I think it maybe got into the high 20's once-even the peppermint scented was evergreen which is rare. It will be a fun and aromatic project to go through all these, cut them back, groom off the old foliage and maybe find a garden location for a couple of them. 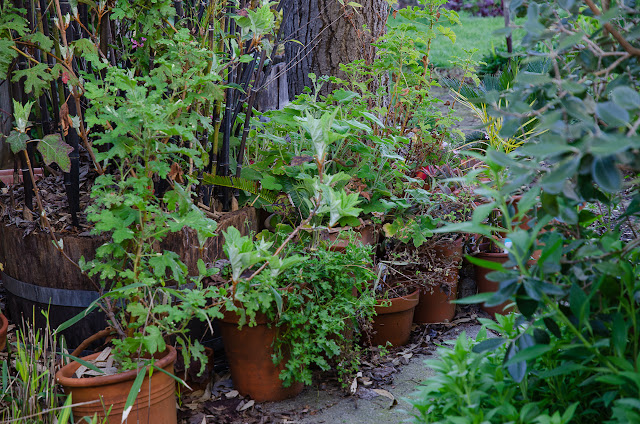 Lobelia tupa has expanded it's footprint this spring. Maybe I should move a couple neighbors out of the way. 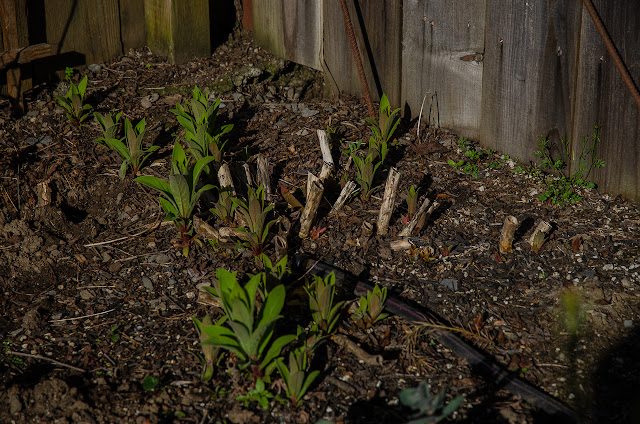 I'm still not done weeding and two of my climbing roses never got pruned. It looks like there is an entire week coming up with either no rain or insignificant rain-I can't even remember the last time that happened. Let the projects begin !
home Spring