- April 18, 2018
I've posted previously about my March visit to Lotusland  which focused on the Bromiliad gardens and the Dunlap Cactus Collection. Today I'll share an overview of some of the other features of the garden. I come home from these  trips happy about the plethora of images I was able to take  only to be overwhelmed when  trying to sort through them and weed out the duds and the duplicates. I actually enjoy the process of sorting and editing photos, but sometimes it's hard to be objective . In fact I will suggest that objectivity is a dying art. I will do my part to keep the flame.
Today I tried to select some decent photos that represented the areas I didn't cover in my previous posts. I took many many photos, both good and bad.Because I am a member I don't have to endure the restriction of a guided tour. The tour is ok for your 1st visit but after that  strolling around Lotusland as a member is worth the price. I would never have it any other way.
The residence is surrounded by fantastically mature cactus with the backdrop of the  Santa Ynez mountain range. Shrouded in mist on this day, these mountains and their foothills were the scene of devastating wildfires in fall of 2017. How lucky that they dodged the bullet . 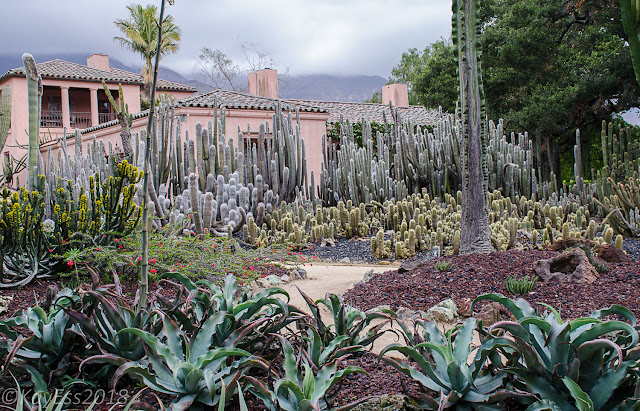 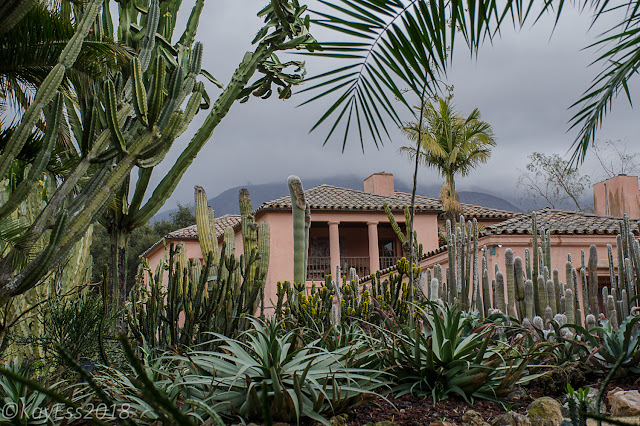 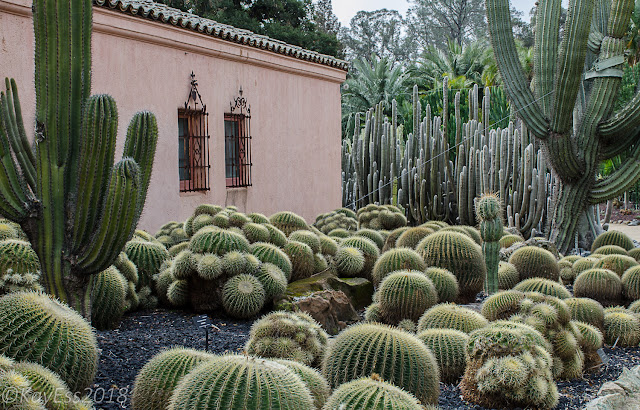 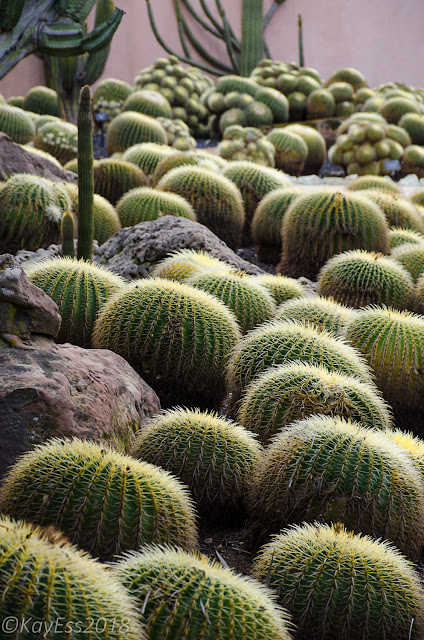 Right up to the entry If you turn around the Golden Barrels continue to march on til they reach the base of the Dracena dracos which form a grove adjacent to the residence. 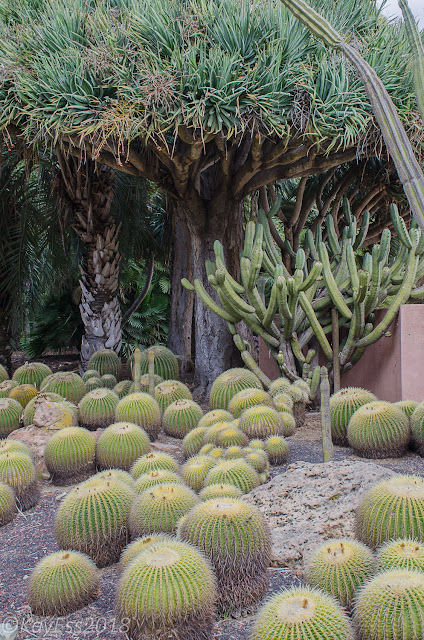 The Japanese Garden is being renovated.The plans seem exciting, involving ADA compliance for paths that were a bit unsound and a completion of plans by the gardens designer that were never executed  in Ganna Walskas lifetime.You can read more about the restoration effort here  . I peeked through the safety fence only to see piles of dirt and excavated pond areas. But can you see the lanterns? I walked along the fenced off areas to try to get a better view. 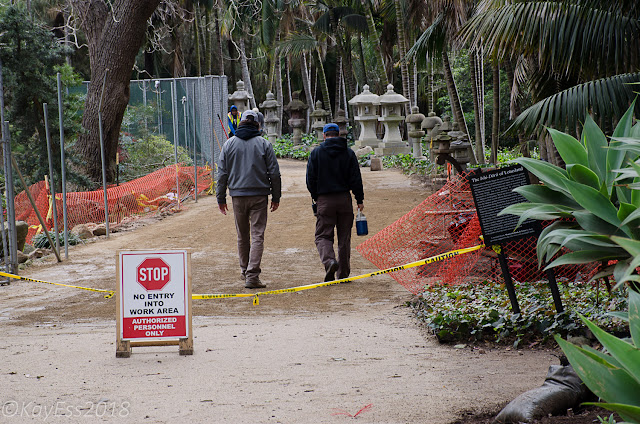 Madame Ganna Walskas collection has been carefully removed from harms way and staged along the path . I have visited Lotusland several times but never had an understanding of the depth and breadth of the lantern collection until I saw it all together like this, one after other in this gently curving row . These were all acquired post WW2 mostly in the 1960's, during the thaw in US-Japanese relations. 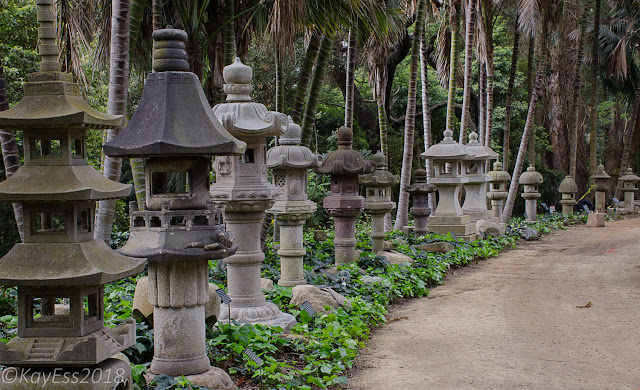 The Aloe Garden features the kitschy-est feature of Lostusland- the abalone and clam shell extravaganza that famously horrified Monty Don when he visited for his Around the World in 80 Gardens series on BBC. I am so very fond of Monty with the soothing cadence of his voice and his gentle approach to the world of gardens-and the dogs of course- but I fear Lotusland laid him low. I'm giving him a pass on this one.
Because Lotusland is closed from mid-November to mid-February I have to believe that peak Aloe blooming season is never experienced by the public. My visit was in March and most had gone over, with only Aloe striata and Aloe plicatilis in bloom. It is enticing to know that there are 140 different cultivars of Aloe in this garden, and one hopes that someday we would be invited in year round . 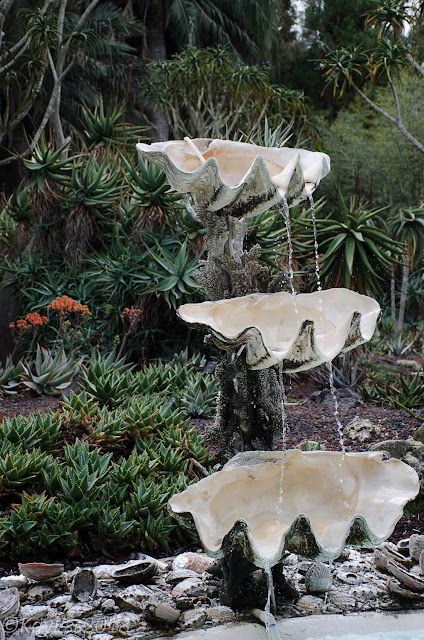 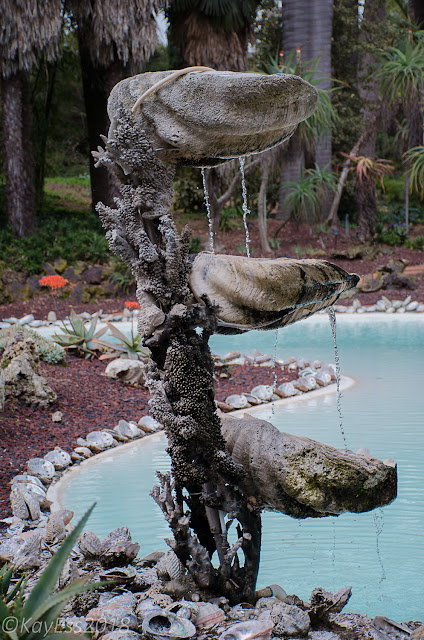 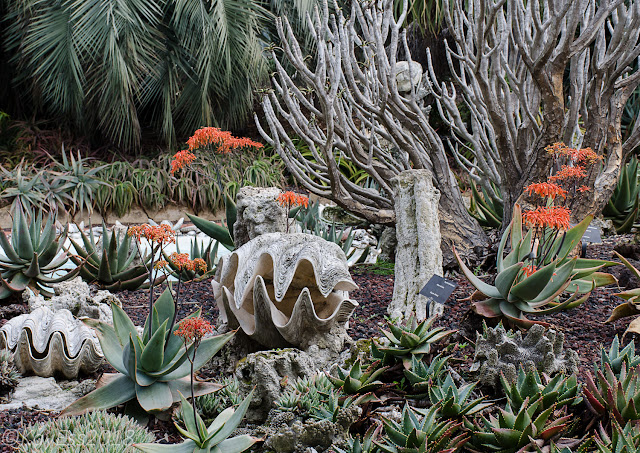 The entry to the Blue Garden. 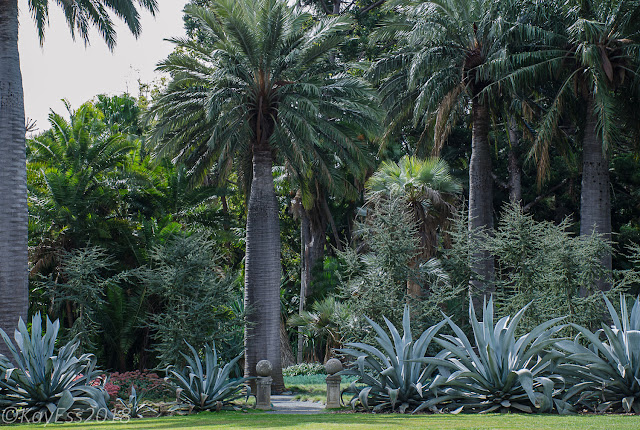 I walked through the Cycad garden twice. I saw quite a few nice Cycad collections when I was on this trip, but this one is my favorite. The dense planting with the paths winding through, positioned before  the backdrop of mature trees and the peaceful crowd free environment provided a deeply calming experience. 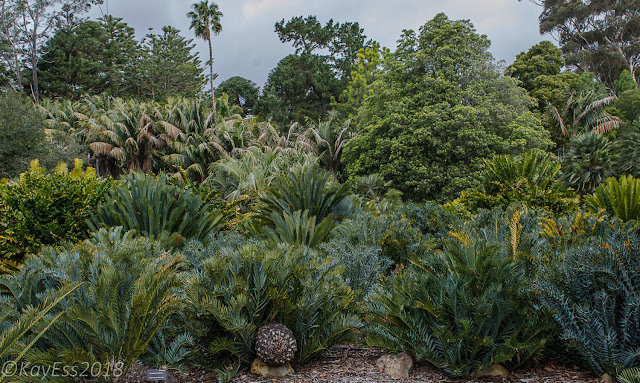 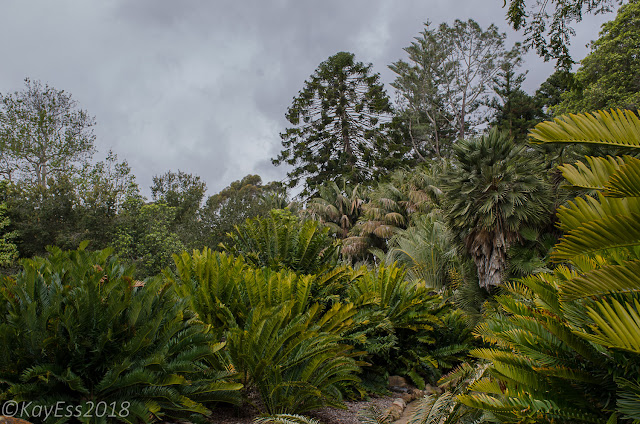 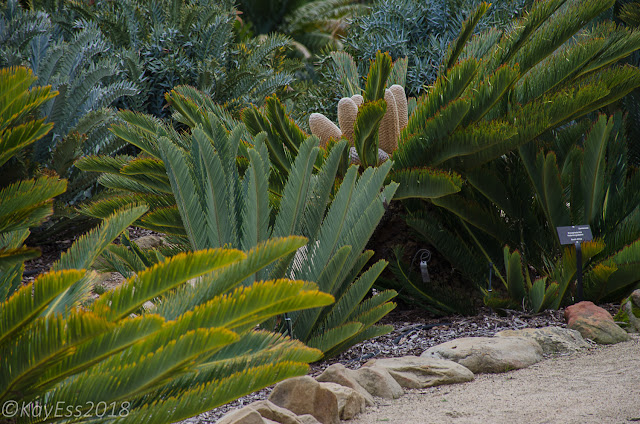 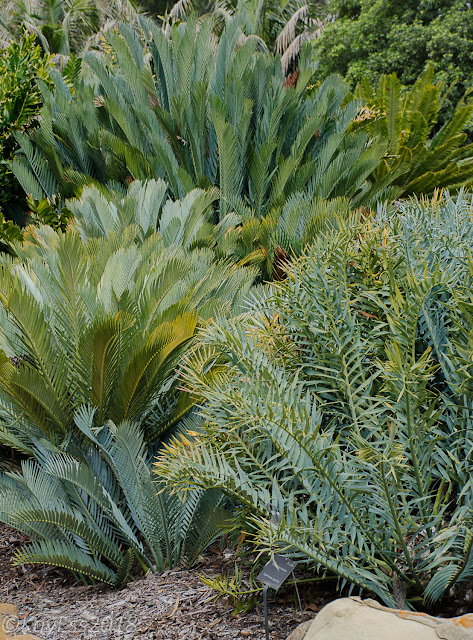 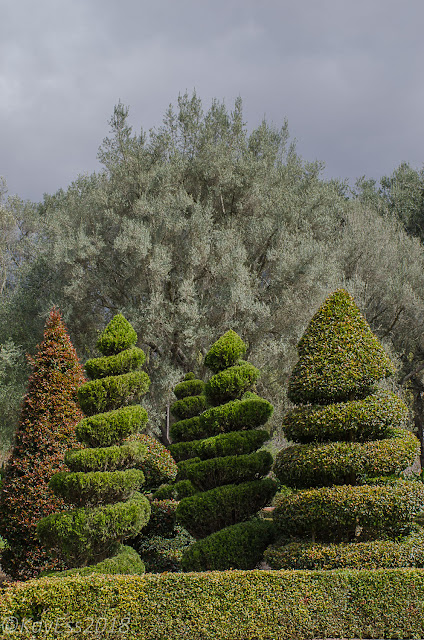 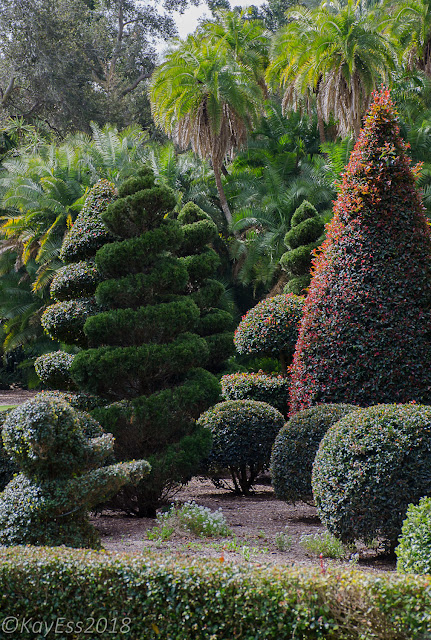 The Eugenia topiarys mark the entry to the fern garden. 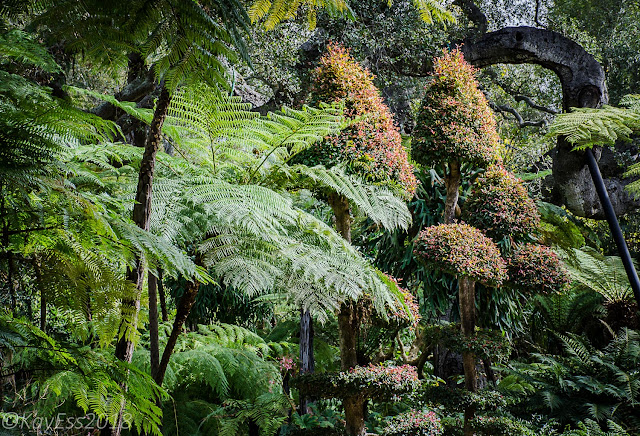 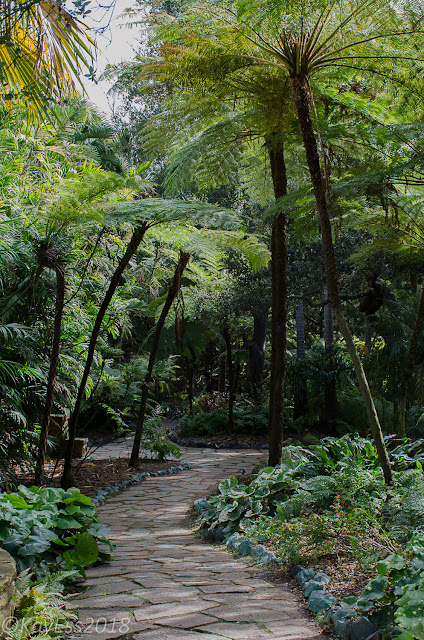 There were some pretty nice begonias in there but I only took these two photos. 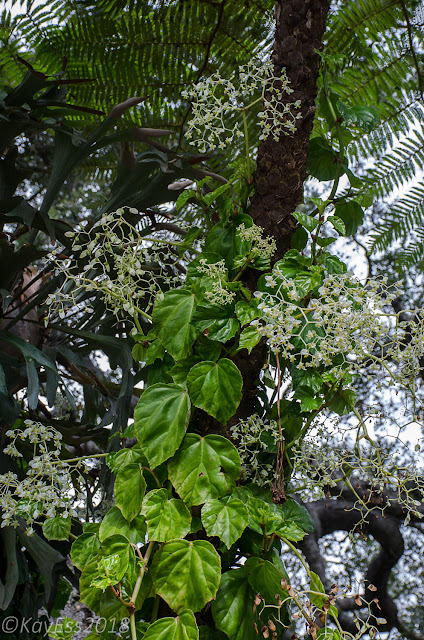 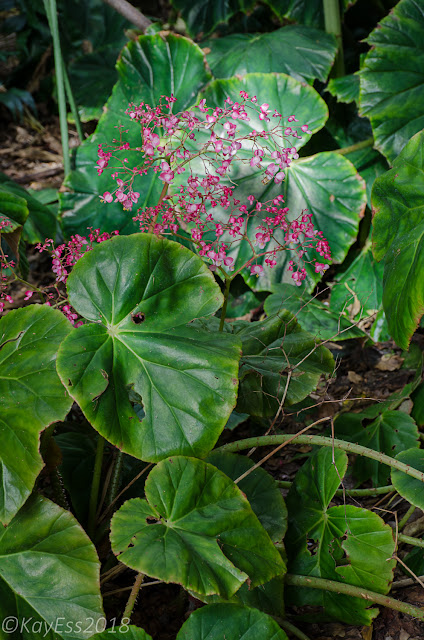 My palm ignorance will be confessed again here, but still I end this post with this magnificent speciman of well--a palm. Bismarkia nobilis perhaps ? 2018 is the year of the Aloe for me on the ID front , but my woeful palm identification skills must really be addressed. Maybe next year. 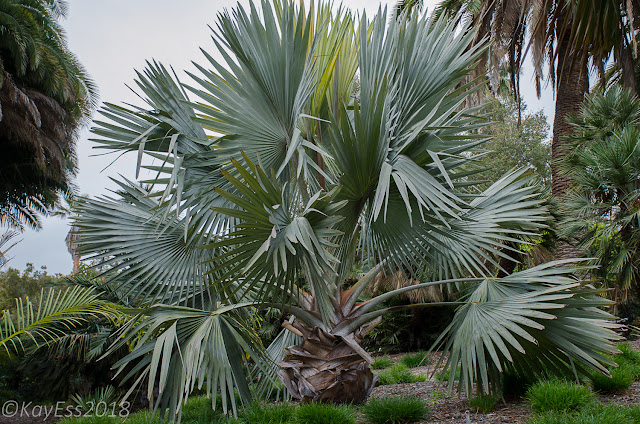