I've acquired a modest collection of Mangaves over the last few years-most of them are still in pots  but I am slowly transitioning some of them to the ground. The advantage with pots is that it's easier to move them out of harms way in winter, which as it turns out is a must-do for some cultivars. Some are also apparently a gourmet treat for snails. I bought most of those that I have collected from the UC Davis Arboretum plant sales-they had them back when nobody else did. This year though I opted to hold off buying any more until I  have a better plan for winter . I saw inconsistent reactions to rain and cold  so a year to just to shift plants around and  observe the results seemed like a wise choice.

The rainy season of 20-21 has featured (so far) only 8.19 inches of rain (season normal in the 25" range) and lots of frost with typical early morning temperatures in the 29 to 32 range. The coldest temp I registered here was 24f . It's not unusual for us to get rain in March/April and sometimes even May-I'm hoping for at least 5 more inches, still well below normal. All to say my Mangave results might vary in a normal year if we ever have another one.

Exhibit A is the sad condition of Mangave 'Kaleidoscope'. It looks only slightly worse than it did after the previous winter-one would think I would have taken evasive action this year but instead I potted up the largest pup last summer and and placed them in separate locations to see how they fared. My intention has always been to give it a home in the ground  but that is looking more and more unwise. I was so excited to find this plant which had long eluded me at, of all places, an otherwise mundane Armstrong Garden Center in San Juan Capistrano on a road trip a few years back.  It was the only one, looking sad (not as sad as it looks now) with a couple of broken leaves and burnt tips.It received no protection from rain or frost, and you see the results below. 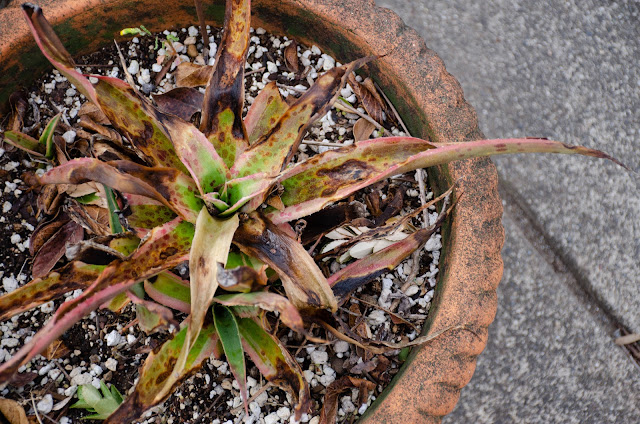 Mangave 'Kalidescope' in it's winter best.

The pups fared much better-the pot lived close to the west wall of the house and was occasionally covered with frost protection. So later this spring I'll repot this and give it both rain/frost covers all winter. Because we are having a Socal-esque rainy season I believe frost and temps in the mid to high 20's are the real culprits. 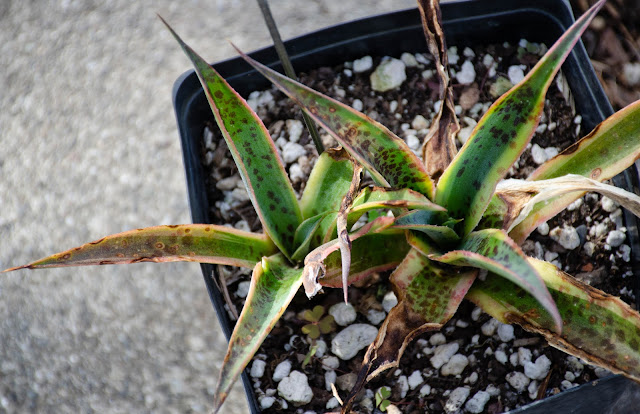 'Spotty Dotty' began to show some damage early on , and was moved to the covered front porch for the duration. Might be candidate for in-ground living if protected from rain---and snails. With a little rearranging I could easily fit several Mangave containers on the front porch next winter. 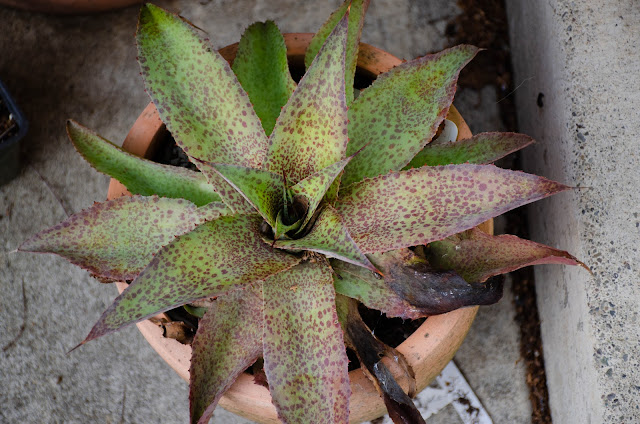 'Crazy Cowlick' spent the entire winter up against the southwest corner of the house under the Acca sellowiana.It was in a rain  shadow which seemed to serve it well, but being in the shade didn't do much for it's color/spots. It will be gradually introduced to the sun. 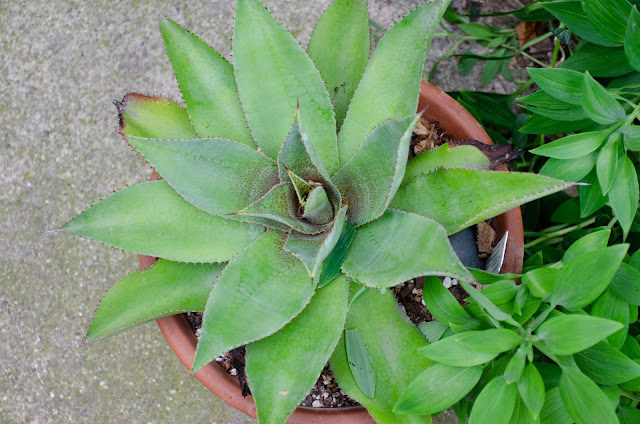 This unfortunate specimen is 'Pineapple Express'. This is it's 2nd winter in the ground -each year in a different spot. The new spot this year was likewise not a success, though it was bermed for better drainage. 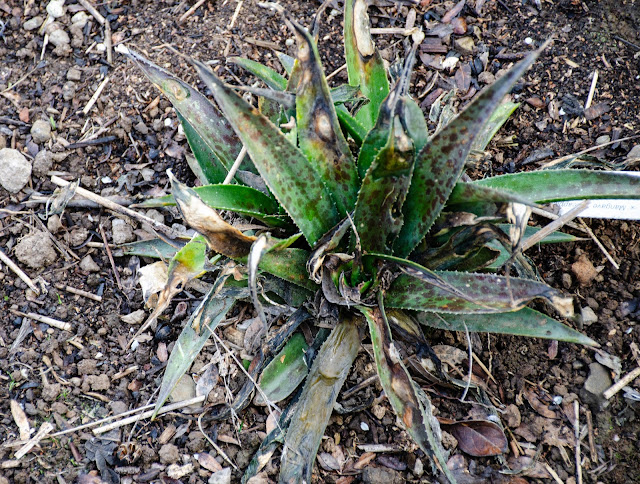 Pineapple express number two, fared much better, however it was shrouded all winter by the allegedly deciduous Spirea 'Ogon' . I really love this Mangave so I need to figure out a spot where I can actually see it-I moved some branches out the way to get this photo-the lower left is pretty much normally invisible. It will be another that needs both a rain and a frost cover. 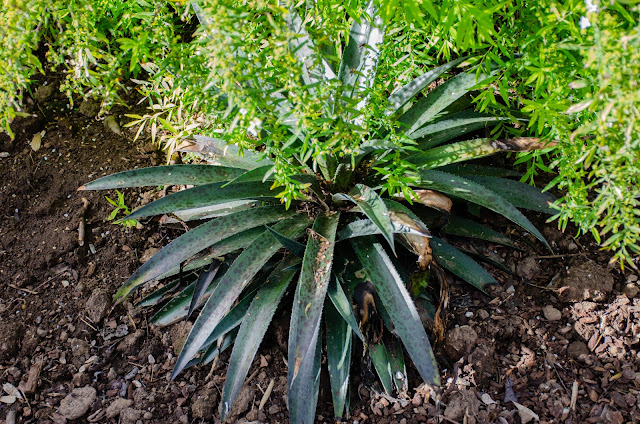 One of the more disappointing outcomes is 'Lavender Lady' which was looking beautiful and pristine in it's container until those 20's hit. I had planned a move into the garden for it this spring -though I am still predictably indecisive about where that spot might be. It seems that cold is the issue here-we got significantly more rain last winter with no ill effects for this one. A frost cloth is an easy solution. 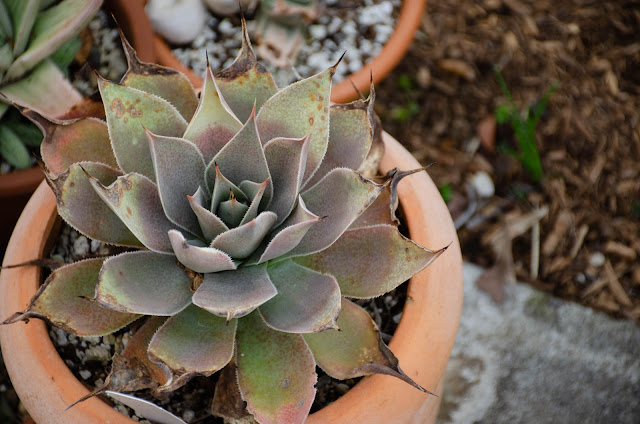 Mangave 'Lavender Lady' ..the inner leaves still look good !
'Silver Fox' was new to my garden in 2020 , and I had high hopes ! I moved it under the house eaves when I saw what was happening . At this point I can see I have to decide just how much plant protection I want to add to my chore list. 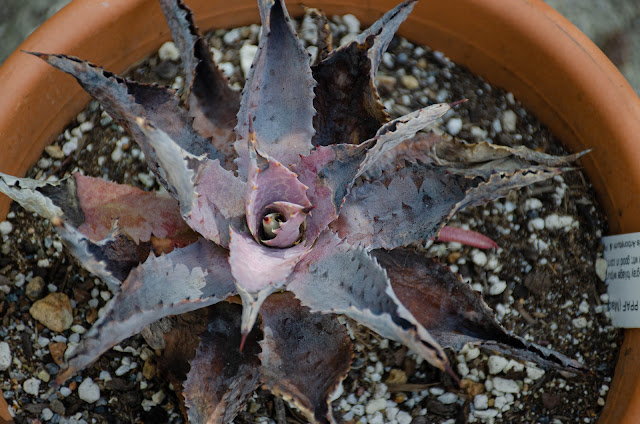 Mangave  'Silver Fox' looking only slightly silver and not very foxy.
But there are successes ! 'Bloodspot' was my first and only for quite some time. I wouldn't be surprised if  'Bloodspot' was most gardeners Mangave entry drug, since for avery long time it was the one and only seen in commerce at least in my area.  I have one in a container and one in the ground. Neither showed the slightest sign of winter blues. 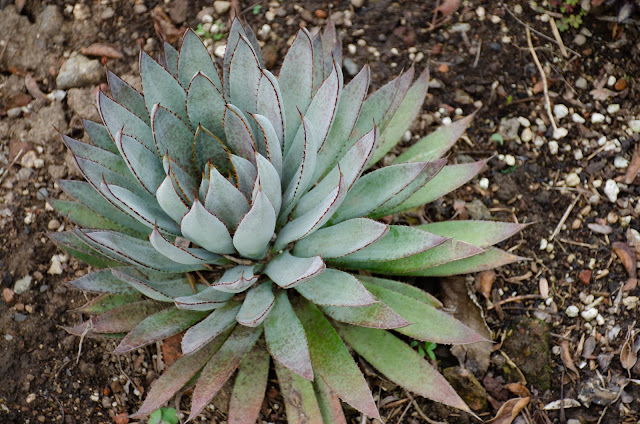 Mangave 'Bloodspot' in the Agave Meadow.

'Purple People Eater' has been in ground for two winters, and the only ill-effects occurred when we had a prolonged frost with a low of 24. Even then the damage wasn't too bad. If I'd thrown a frost cloth over it the tip burns probably could have been avoided. I'll be more vigilant in the future. 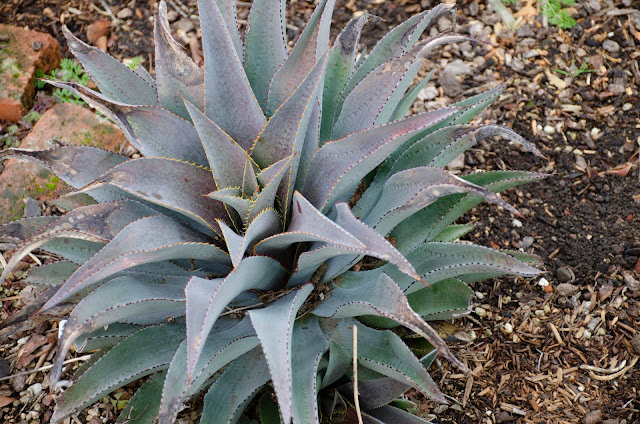 Mangave 'Purple People Eater' is a keeper.
'Moonglow' like 'Bloodspot' sailed right through. I bought a second one. One in a pot, one in the ground. This was planted with enough room for it to grow to full size. 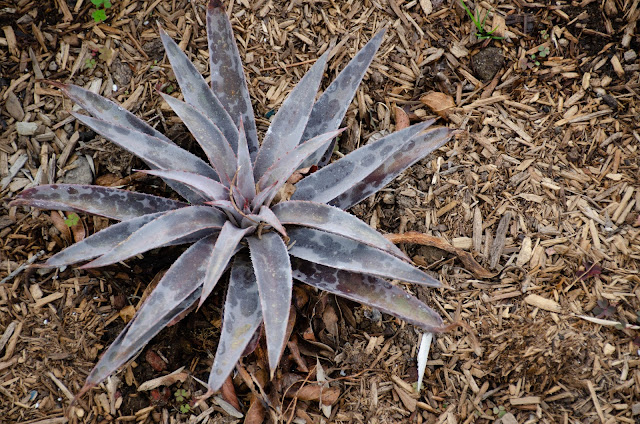 Mangave 'Moonglow' got a spot next to Meliathus 'Purple Haze' just out of view to the left.

'Man of Steel' needs to get out of this pot. Must be about 10 pups in there and not a touch of winter damage. I will likely pot up a couple of those pups separately as insurance in case the move doesn't work out. 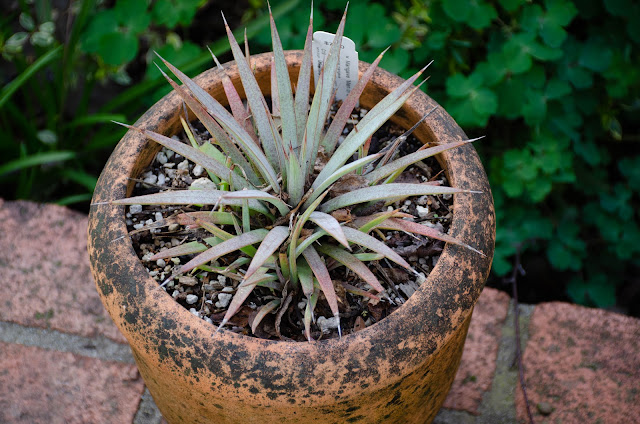 Mangave 'Man of Steel' Pretty crappy looking pot for such a nice plant-it deserves better.
In conclusion, I give you Mangave 'Navajo Princess'. It looks almost exactly the same as the day I planted it in 2019 because well..it doesn't seem to grow. Nor does it have the Agave 'Joe Hoak' style curvy leaves seen in photos. Gave it a nice big pot too. The good news is it seems pretty oblivious to the weather, so it's a perfect candidate for the garden. 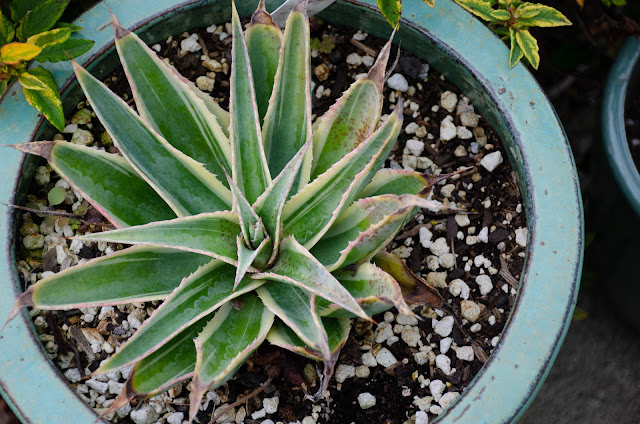 Mangave 'Navajo Princess' will surrender her container to a more grateful resident.
In other news, it's spring full-on. Like last spring I am still working from home most days and grateful for the chance to spend more time seeing the garden.
home Succulents winter