- February 06, 2019
I picked February for my spring road trip this year -earlier than my usual March or April dates. Since I was heading to southern and central California I hoped to catch some nice blooming Aloe action at the various locations I scheduled myself  to visit , including the Taft Garden  and the desert garden at the Huntington among others. As is my custom the trip was planned out with a highly developed daily schedule including approximate departure and arrival times, where I was going to stop for gas, how long I would spend at each venue and so on. As the trip dates got closer the weather forecast began to deteriorate to the point where I briefly considered cancelling the whole thing. But I really needed to get away for a few days of solitude so I rolled the weather dice and carried on with the plan. Mother Nature apparently had no interest in my itinerary. On the plus side, the drive down 101 from the bay area to Santa Barbara was incredibly beautiful. There were patches where it rained like hell , but it was a Saturday morning so there was very little traffic, no big-rigs and it was easy to keep a lengthy distance from other cars to help with visibility during the rainy bits. Once I got south of Gilroy the rain was periodic squalls that came and went quickly. I have never seen so many rainbows in one day. Long about San Luis Obispo I started to see the temporary warning signs advising that Highway 101 was closed at Milpas Ave in Santa Barbara due to flooding. Great. Milpas is on the northern end of SB, my hotel was in Carpenteria, slightly to the south. There wasn't much choice but to just keep going . Naturally the alternate route -and there really is only one- was the same for everyone. I spent 2.5 hours getting from the north end of Santa Barbara to Carpenteria. At least I had an ocean view on the drive.
Everything I had scheduled for the Santa Barbara portion of my trip did not happen. No Taft, no Sunday drive to the Huntington, no Seaside Gardens, no SB Botanical garden.  When the rain let up a bit I went  out and found a few things to take photos of . I spent 2 nights at my hotel in Carpenteria and then headed back north to Baywood-Los Osos at the south end of Morro Bay.

On Sunday in Santa Barbara I took advantage of what looked like a break in the storm to take a drive around the city and look at commercial plantings. I often found myself rushing back to my car with my camera under my raincoat . Here are the few images I was able to capture between the deluges.

This was hotel garden on the main drag (State Street )  and wow was it nice. This is just a mundane chain hotel (La Quinta) but the entire property was ringed by fantastic plantings. I wondered if this is a franchise and locally owned or if the corporation allows for regional diversity in landscaping. 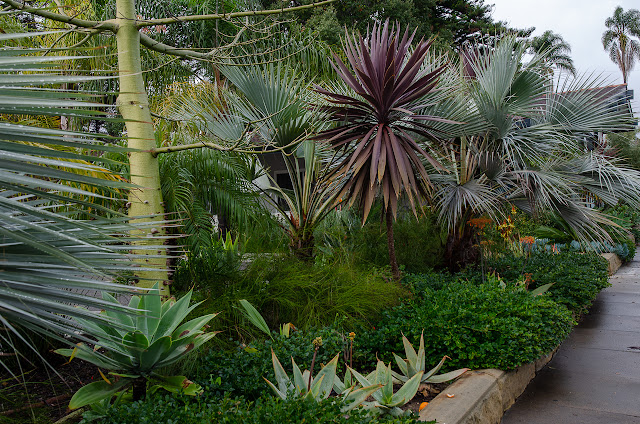 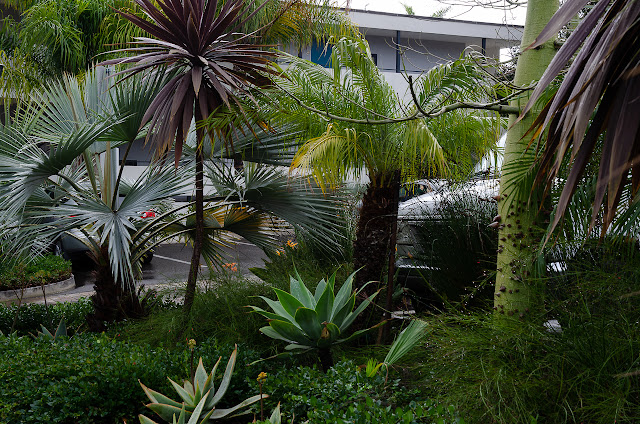 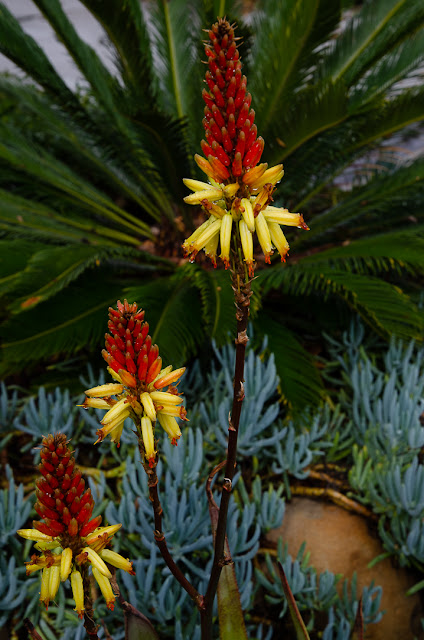 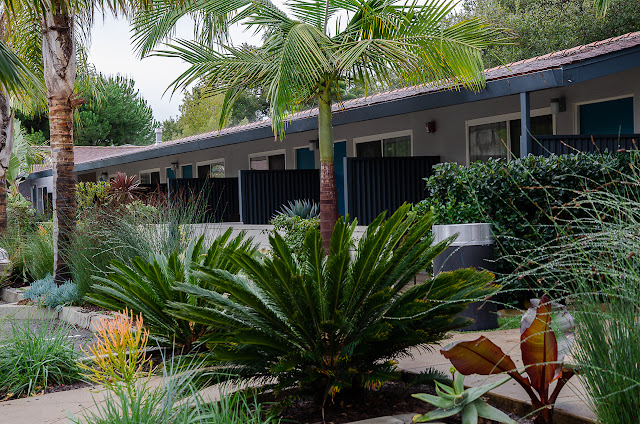 A few blocks north was the Lemon Tree Inn , and the strip along State Street between the parking lot and the driveway was planted with a row of lemons, palms, Aloes and Agaves. I had to stop here three times to get photos-why did it start pouring when I turned into the parking lot ? 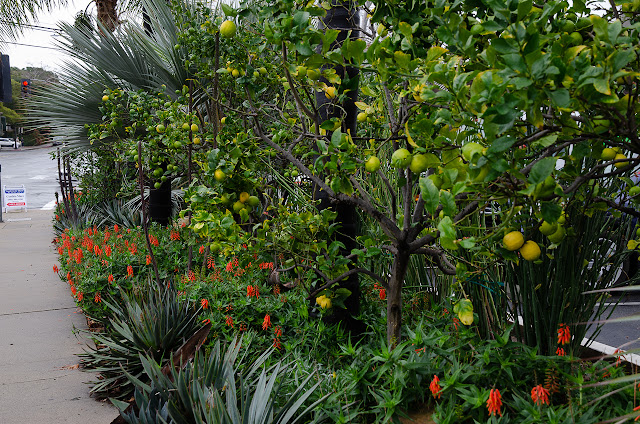 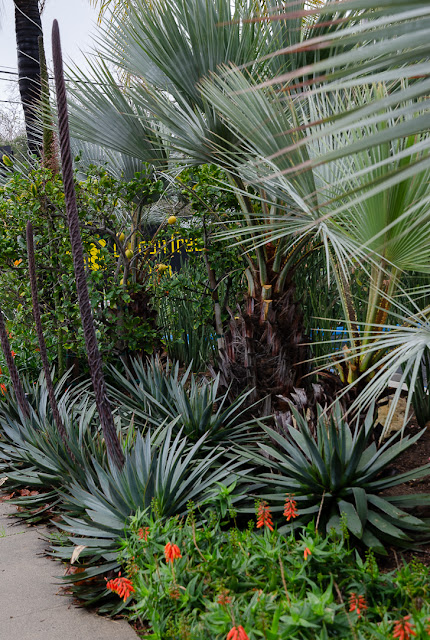 This planting was at a storage facility in an industrial area of town. Not bad ! 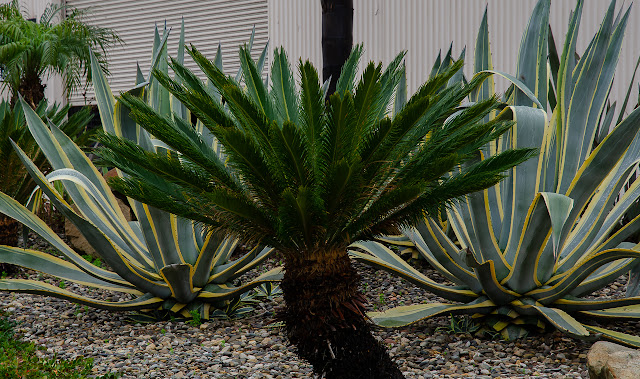 On Monday I packed up and headed back south to Baywood-Los Osos,  a quiet town on the central coast . I stayed once again at the Back Bay Inn which I blogged about here. This turned out to be the nicest part of the trip--it rained of course and it was cold and windy as hell. I had my bay view room where I could watch the storms and see the seabirds come and go with the tides.
My drive to Morro Bay was not too rainy and I decided to take advantage of the break in the weather to stop at the San Luis Obispo Botanical Garden.  This garden will have it's own post later this week. 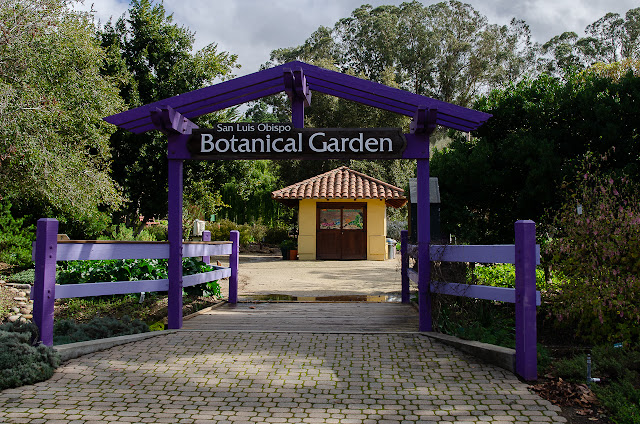 The weather was coming in when I left the garden and by the time I got to Los Osos the storm was unleashing. 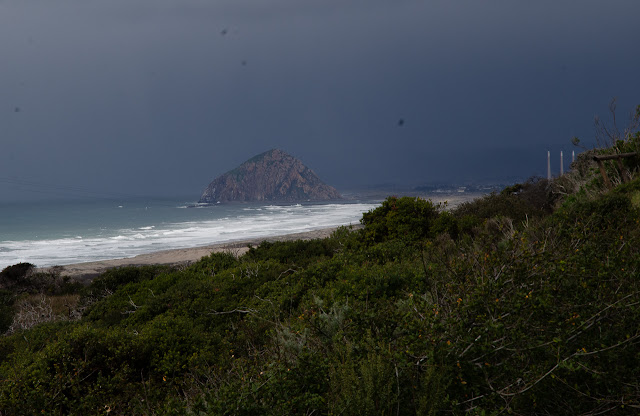 I took advantage of every break in the rain to run down to the gardens at the inn for a few photo ops. These are selection of the photos I took over two days. 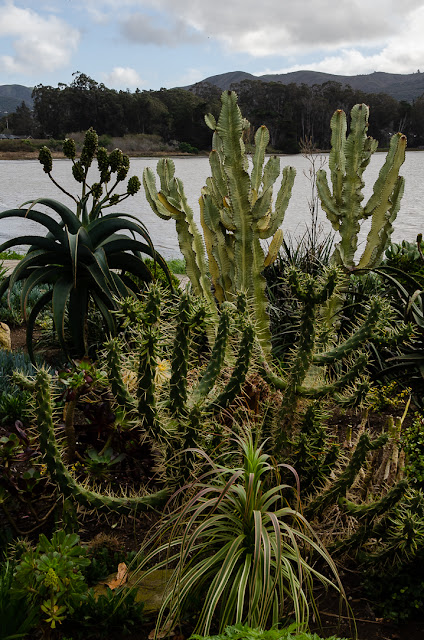 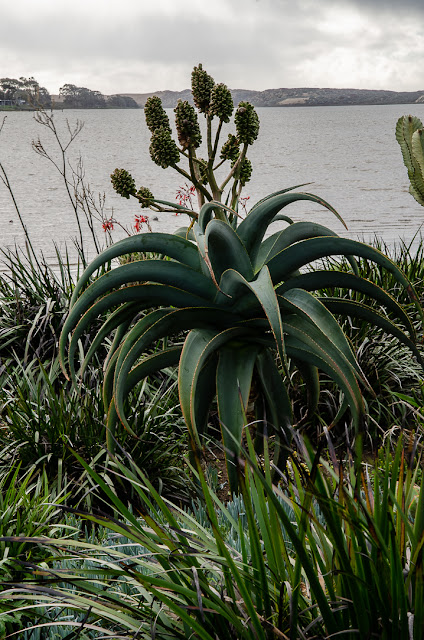 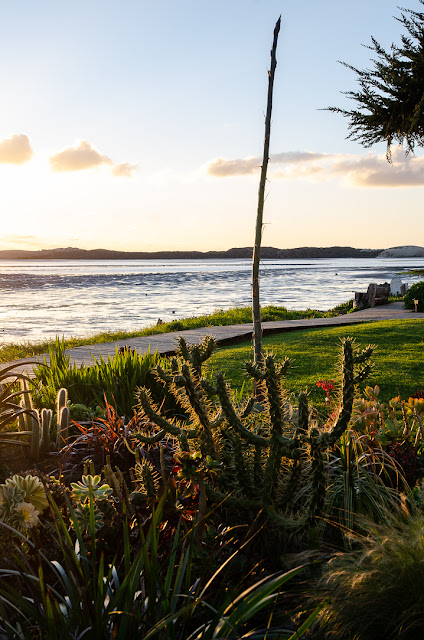 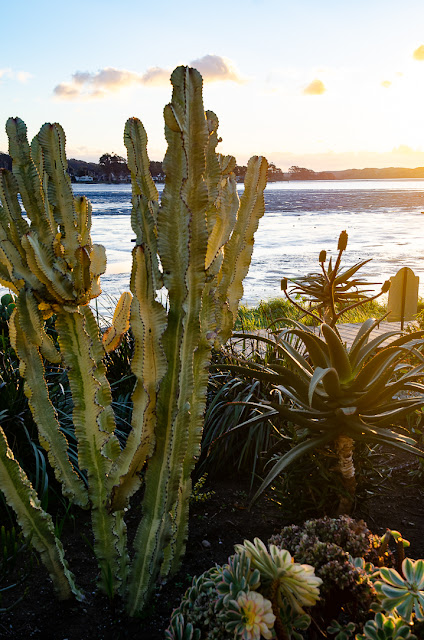 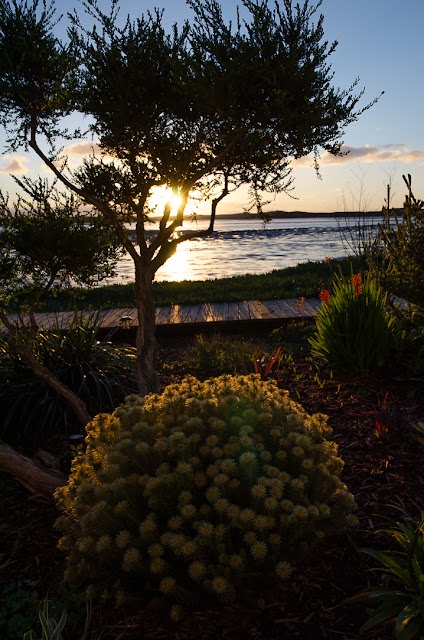 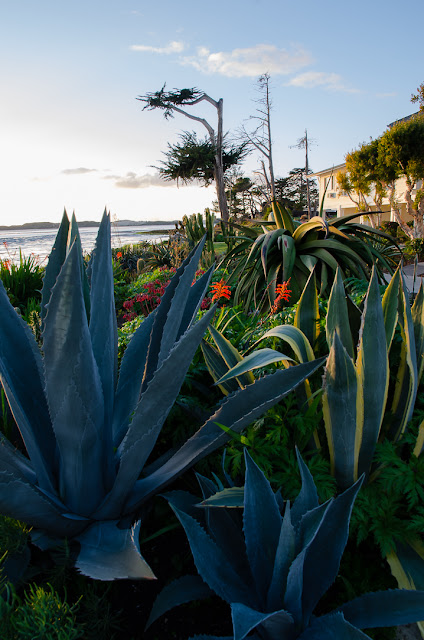 You can't go wrong with a sunset view like this. 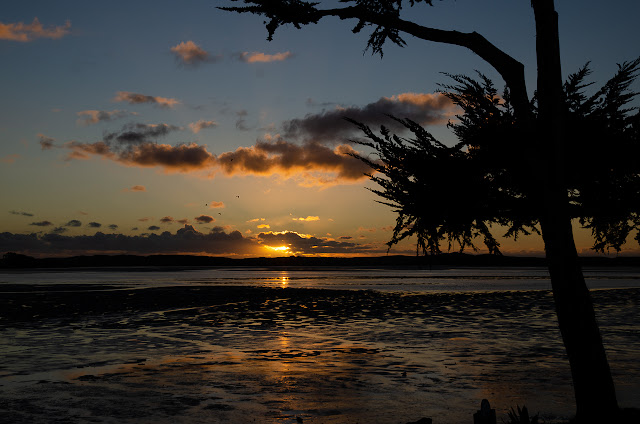 I'm glad I didn't cancel the trip , even though it was not the trip I planned. For the first time in many years I came home from a road trip without a single plant purchase. Not one single plant. I have a few more days off now at home and the rains are supposed to come back over the upcoming weekend. I've accepted that I am going to be playing catch-up in the garden for the next month at least. The tulips are up and so are the weeds. Looking ahead to another road trip in April. 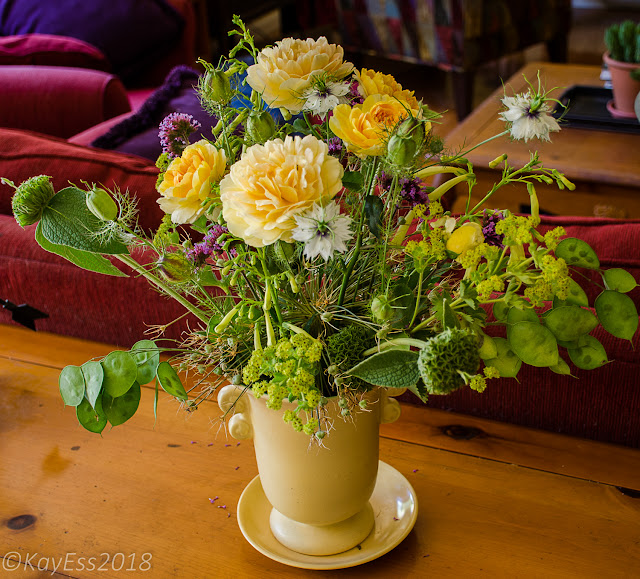