When I received notification that one of my preferred inns on the coast was opening I jumped on it right away. This lodging consists of several stand-alone cottages with no indoor common area, and check in and out were contact free. Funny to think that 6 months ago the concept of contact-free anything was  was unfamiliar. I felt comfortable with the protocols in place and booked a three night stay. The Innkeeper called me two days in advance to ask what my needs would be i.e coffee (hell yes) extra blankets, hair dryer etc. Cottages are left fallow for a day after each guest departure. Guests are provided with a mask, hand sanitizer and disinfecting spray cleaner if you wish to double clean what has already been addressed by the housekeeping staff. Happily the crappy Mr Coffee brewer was replaced with a French Press which was a coffee experience I hadn't had in many years. I might rethink my brewing equipment at home.
Along with the lodging, Mendocino Coast Botanical Garden was open for all as of June 15th-just a few days before my journey. The usual mask and social distancing rules were in place. The public had to buy advance tickets but members (which I am) could just walk in. Days open are reduced to Sunday through Thursday but fortunately I was there on Sunday . I hope to go back in August unless California has to close up shop again.
Because of the lack of revenue and volunteers since they closed in late February I was worried that there might be maintenance issues-but those fears were not justified . The garden looked great and progress was being made on some of the newly developed areas. I took tons of photos so I'll break this into two posts. Today we'll stroll through the perennial borders that surround the central lawn. 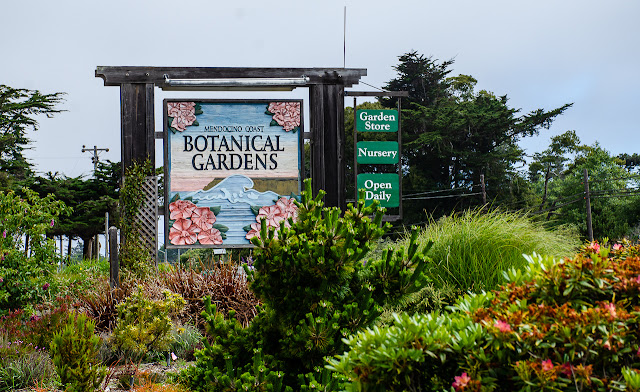 Layering and color/texture contrasts are notable in this garden. Not something that is necessarily easy to achieve. The study of borders like these can be a lesson in sophisticated garden design. You can learn much in this garden that is achievable on a small scale. 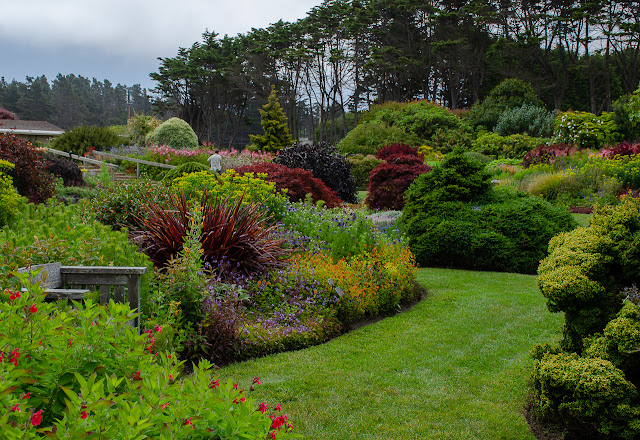 This bed is a lively jumble of volunteers punctuated by evergreen accents. Some years it is a forest of Angelica (which you can see in the middle of the image) but this year it looks like the Filipendula made a stand and won the day. You can see the swath in the photo above. The Geranium 'Ann Folkard' weaves through a patch of Anthriscus 'Ravenswing'  and is on a mission to clamber up  the Angelica. 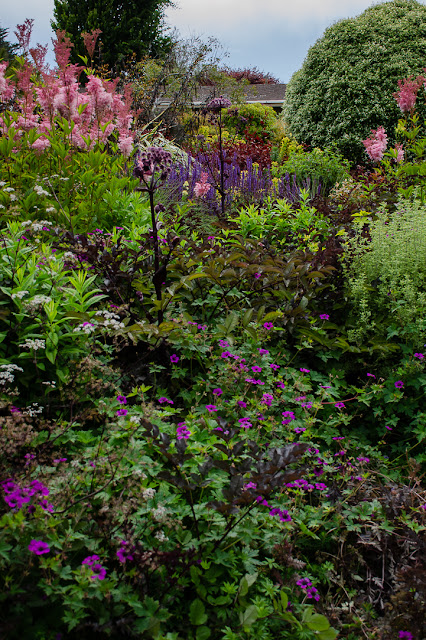 Another perspective -the white cloud on the right is the abundance of Anthriscus. Every year this  planting is a little different. 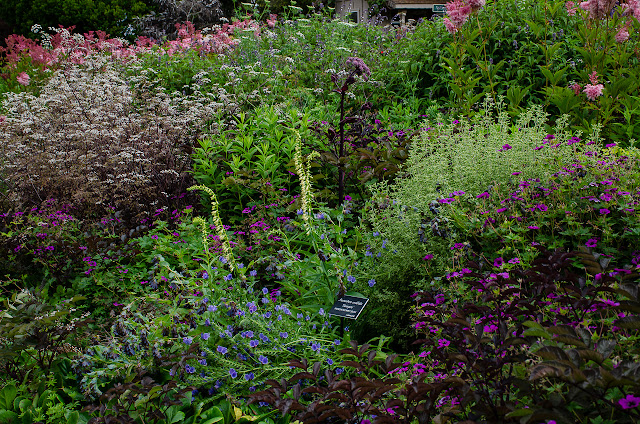 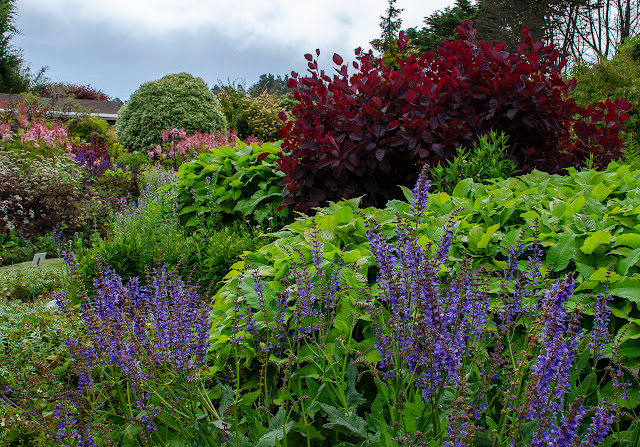 More Filipendulas in the distance 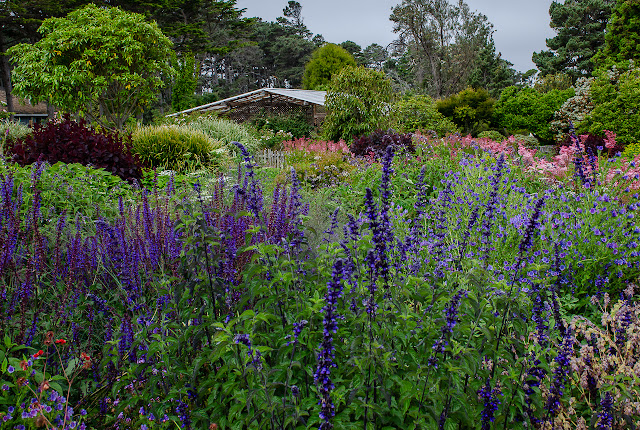 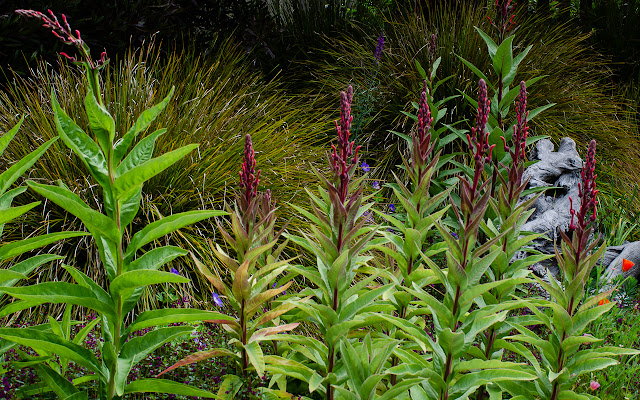 Could this be some sort of Silene ? 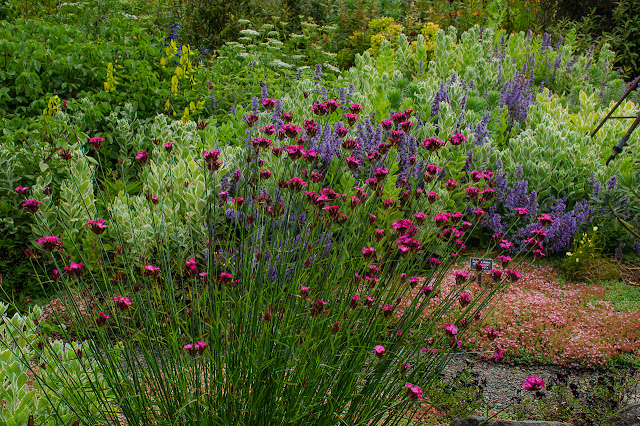 Melianthus 'Antonows Blue' will be large and imposing by fall,competing with the nearby grasses to be the anchor plant in this bed. 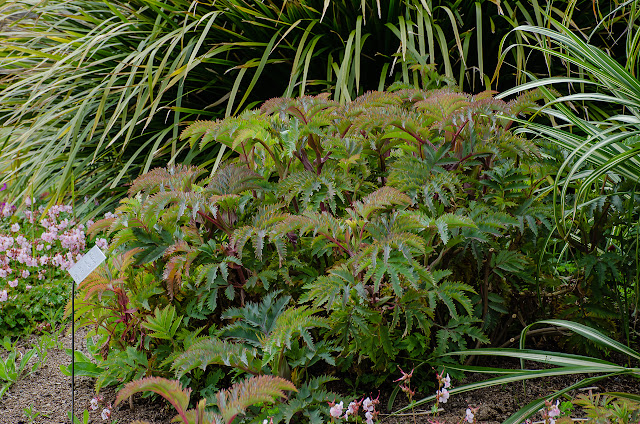 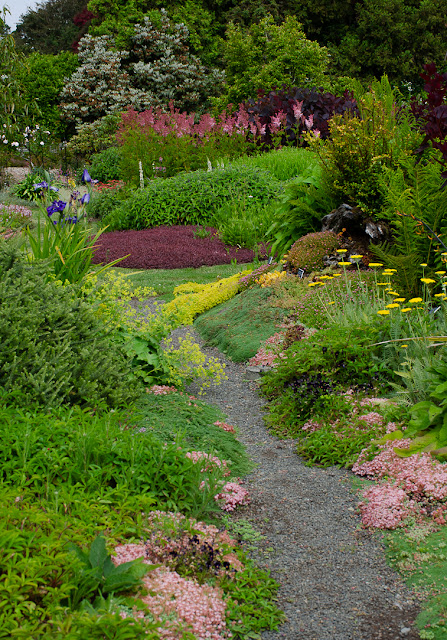 One of the re-done areas. They edited out some grasses that were overly enthusiastic-but dramatic. 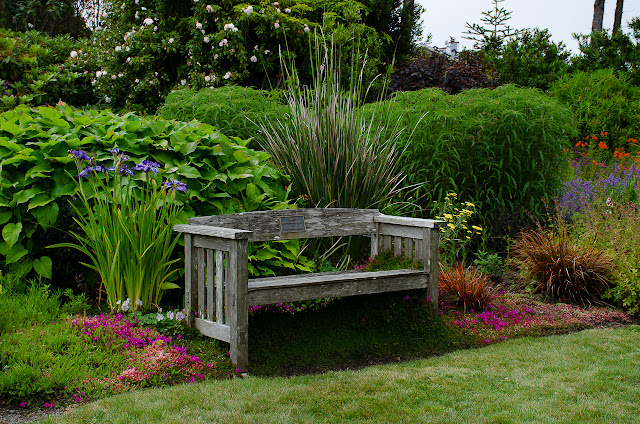 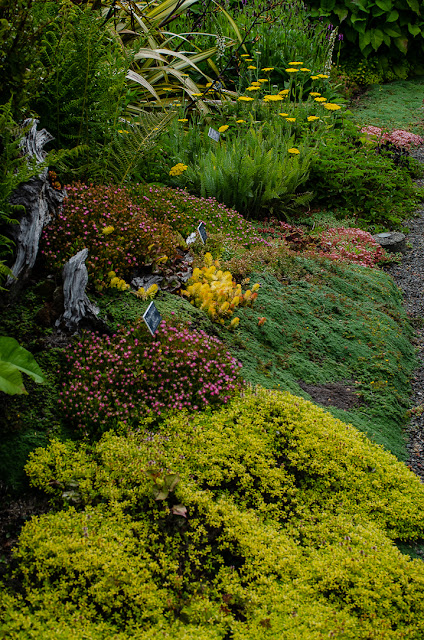 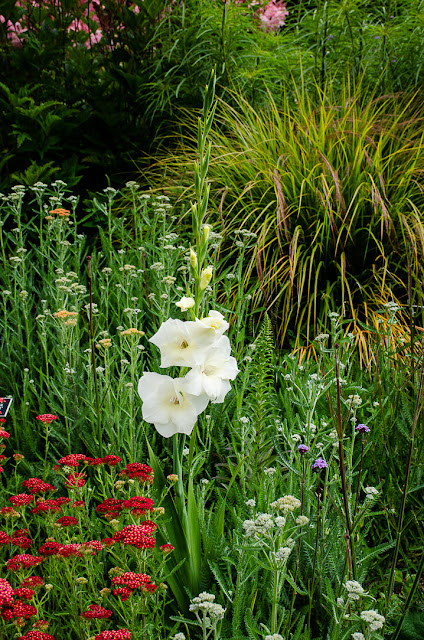 A good place to sit-and you can view the Filipendulas in the unlikely instance that you missed them elsewhere. 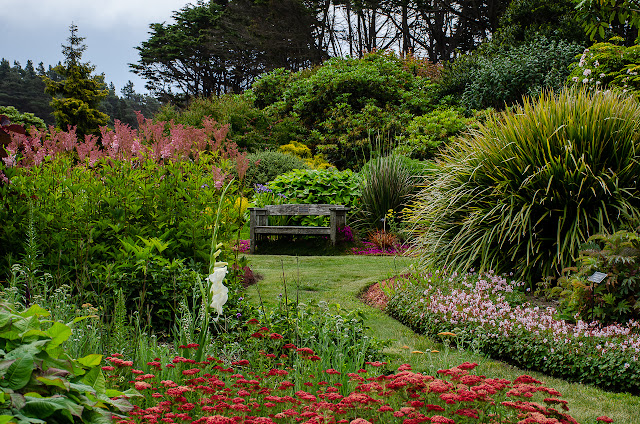 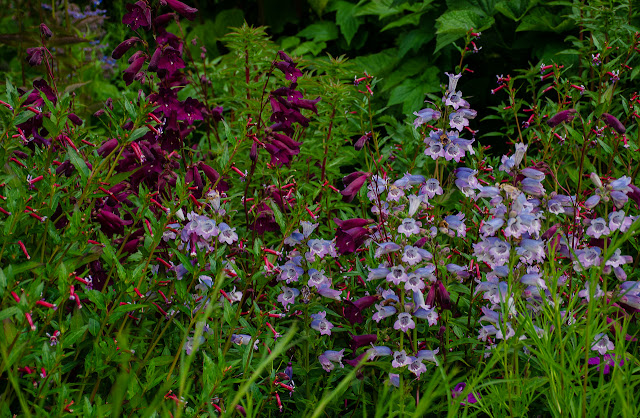 Conifers, Cypress, Japanese Maple, Beech. So many things can grow in this frost-free maritime climate. 75 is a heat wave. 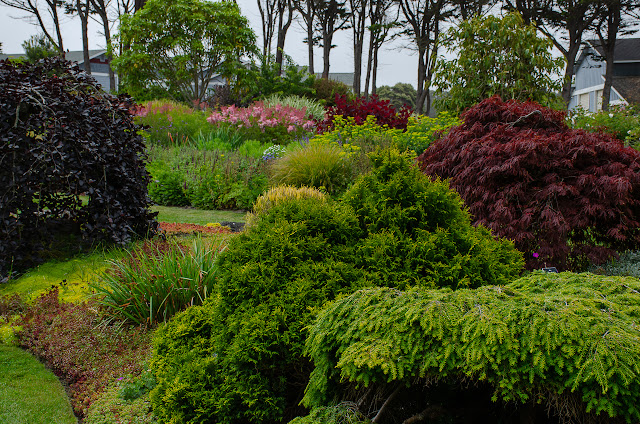 This Nigella made me realize that my decades old re-seeders may need an infusion of new color. My blues have gotten a bit insipid, pinks have disappeared but the whites remain dependable. 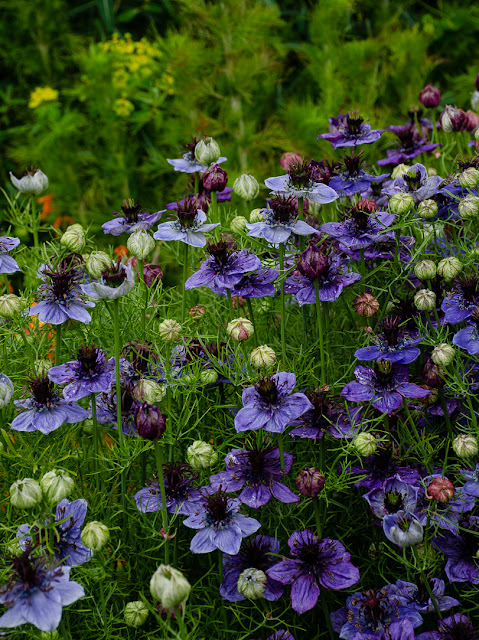 And then pair it with Cuphea 'Strybing Sunset'. 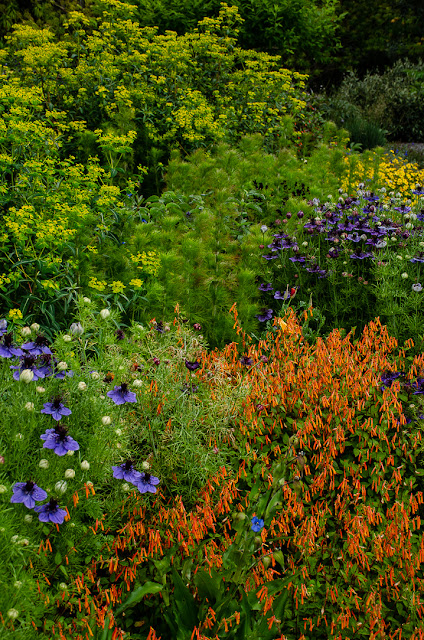 Getting the orange on. I now have my very own Stybing Sunset. But I don't have this gaudy Poppy. 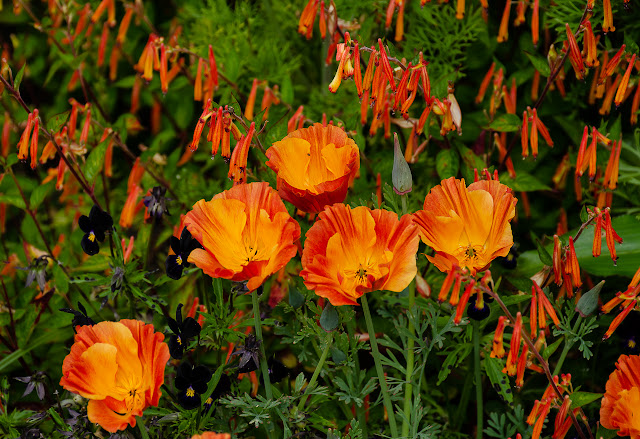 Showing the others in the neighborhood. 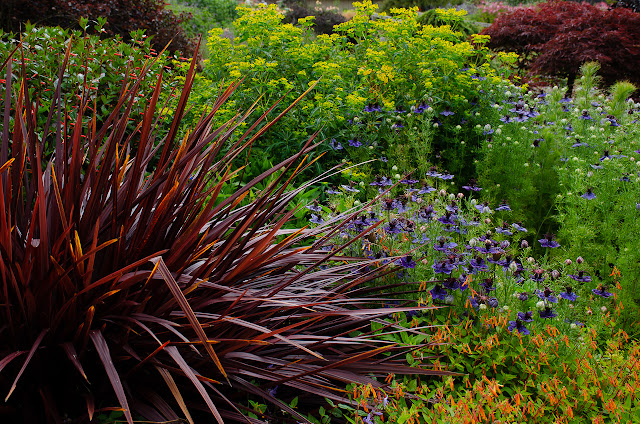 The conifers are part of the bones of this garden. A new conifer collection is in the works. 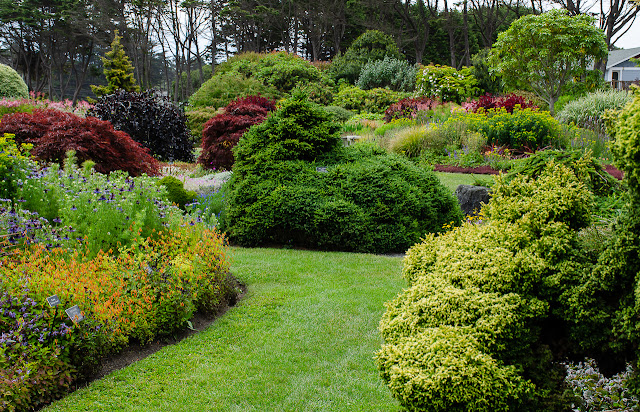 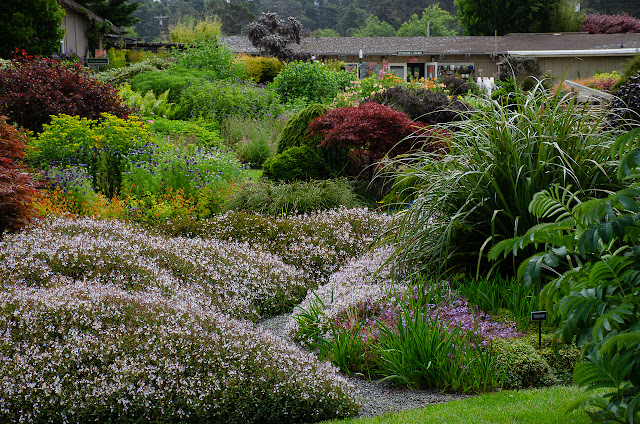 A purple Nepeta or Agastache stripe through the Bidens. 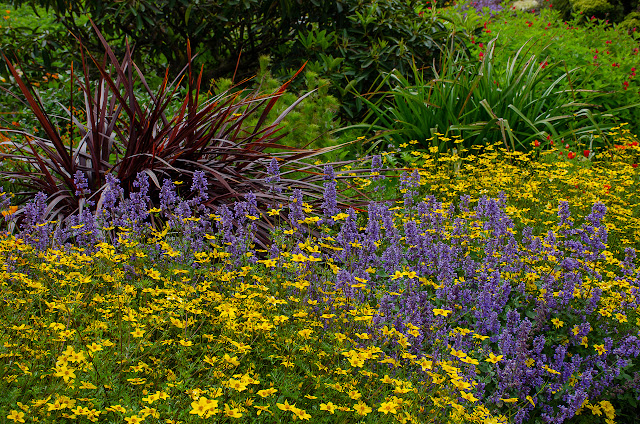