- April 22, 2019
My February road trip to the central and south coast of California was disappointing in the weather department. I enjoyed my trip but there were plenty of horticultural activities that  were rain-outs. After returning  home I  decided to re-do the trip in April.It was a somewhat fiscally irresponsible decision -I was basically shelling out the bucks for the same trip , two months apart. It was worth it, and I have no regrets. My only disappointment this time around was that there were no rooms available in the hotel of choice in Santa Barbara, so I had to fall back on my Best Western option in Carpenteria. I was ok with that-who cares much about the lodgings when you have Lotusland and the Taft Garden on the agenda.

At some point during my February trip I read information about the renovation of the Skyview Motel in Los Alamos. Anyone who has traveled US-101between Northern and Southern California in the last several decades will recognize this iconic hilltop 1950's motel with it's neon beacon looming above  the highway. When I was a child (which was some time ago) I dreamed of staying here, way up on the hill overlooking the coast ranges , with a Heated Pool -back then my number one criteria for a motel. The renovation looked promising and how can you not tick off a childhood bucket list item ? 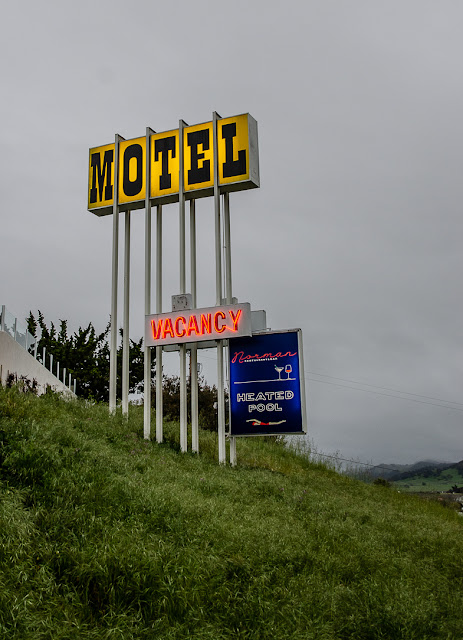 I must say they did a really nice job , and were probably only able to make it work due to proximity to the Paso Robles and Santa Ynez Valley wine country. But the plants ! Heavy on Agaves, grasses, Palo Verdes and Citrus. 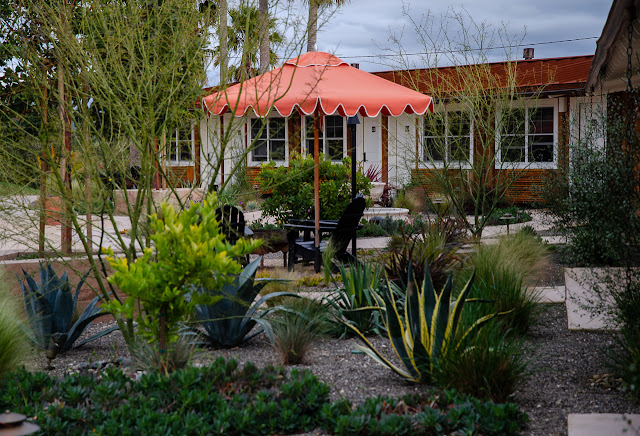 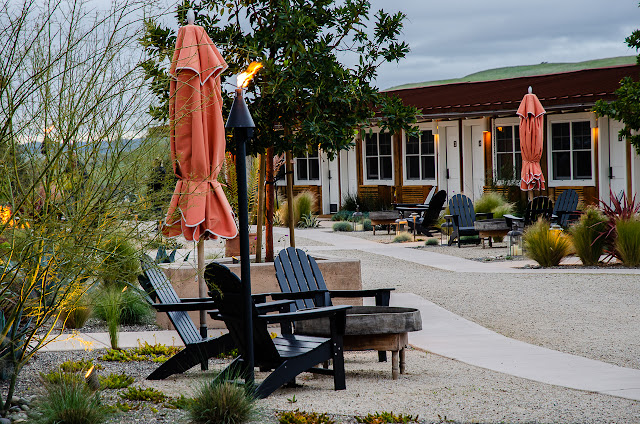 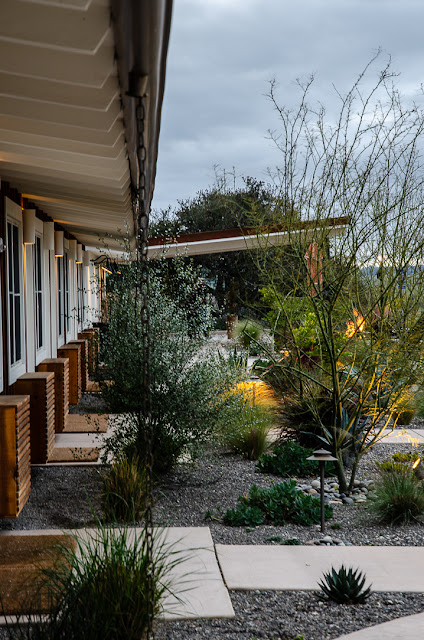 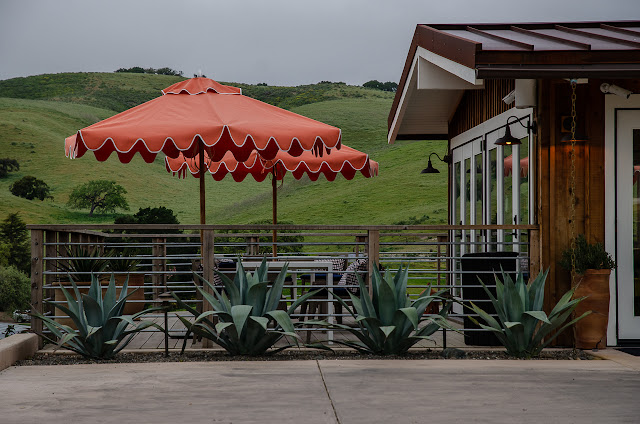 Our California hills were still wearing their winter green, but I love the golden brown of summer too.


This is the  Best Western Hotel where I sometimes  stay in Carpenteria . I always get a courtyard room on the ground floor which gives me a little patio -I hate being cooped-up inside. This is not a great photo, but the exterior architecture of the hotel is really nice-these are classic wood French doors with patios and balconies overlooking a central courtyard of tropical plantings. 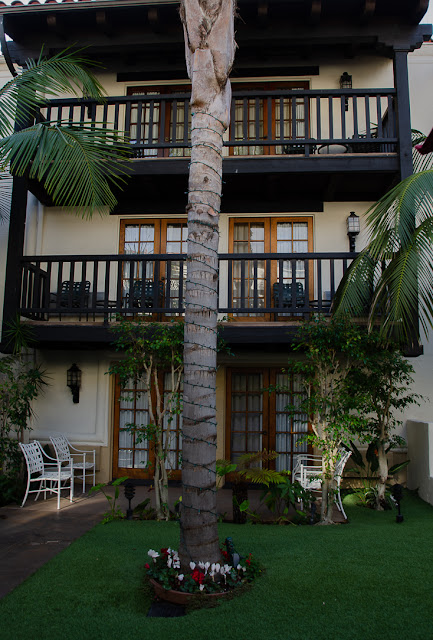 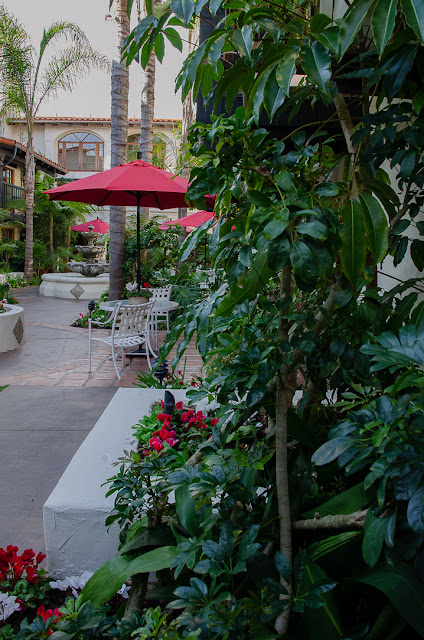 On this stay I saw this--stacks of Jeld-Wen vinyl sliders staged on the corners of the courtyard. Take a look at the photos above and imagine the wood patina replaced by these cheap-o replacement doors. What a mistake. I can understand the maintenance issues , but this will completely ruin the architectural integrity of this building in my opinion.  The architecture of  historic buildings is a feature of the Santa Barbara area (along with the Pacific Ocean) and one of the reasons that it is a popular tourist destination. 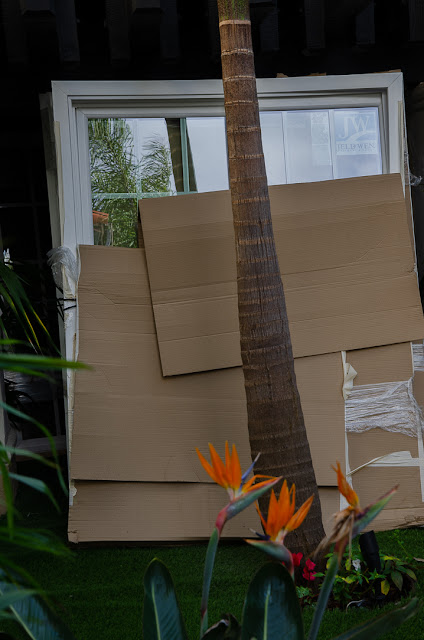 I will have a post dedicated to my Lotusland visit soon, but I will share here the Origami exhibit in Madame Ganna Walskas' residence. I happened upon it quite by accident. 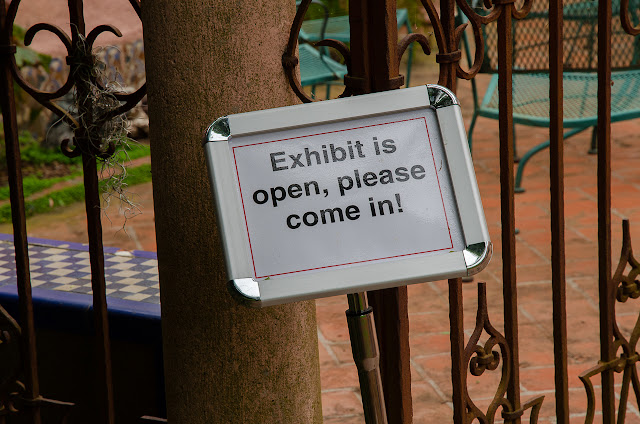 I won't even try to explain this portion of the gallery;suffice to say this Origami piece was about 3 feet across and was suspended from the ceiling in an empty room-there were several others of different sizes. It was kind of mesmerizing . Adding to the atmosphere was the fact that there was not a single other human in the gallery . 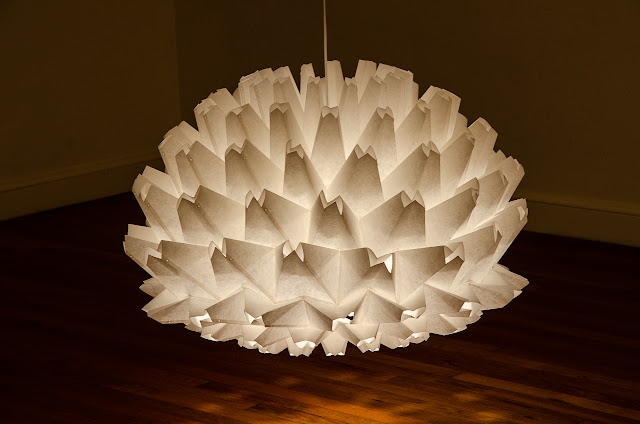 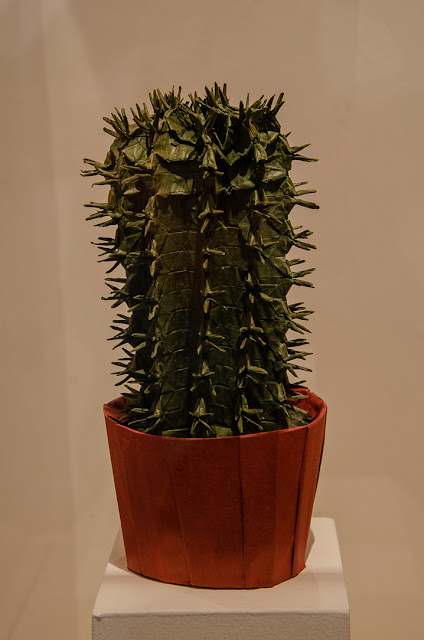 Origami Agaves-you can guess who came to mind when I saw these ! 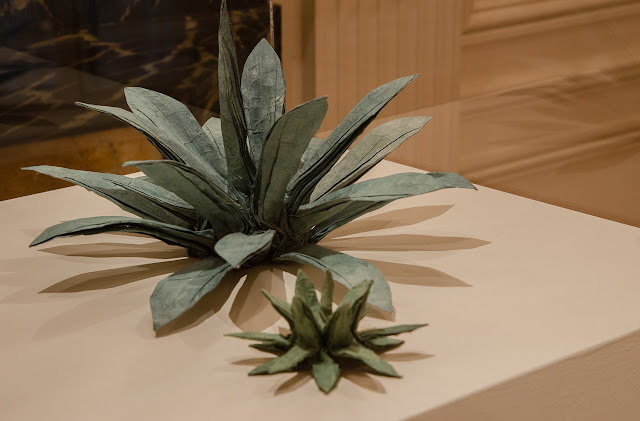 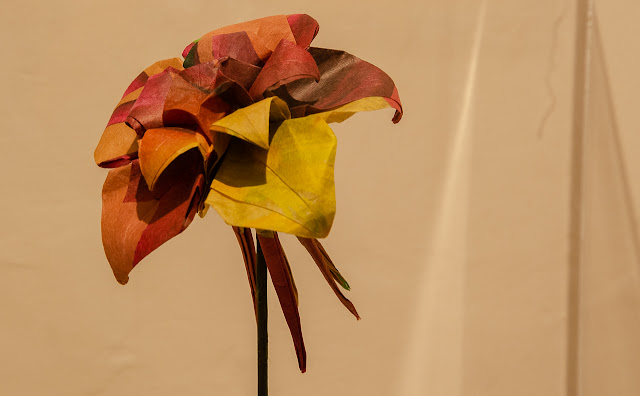 Rill in the courtyard outside Madame Ganna Walskas boudoir. 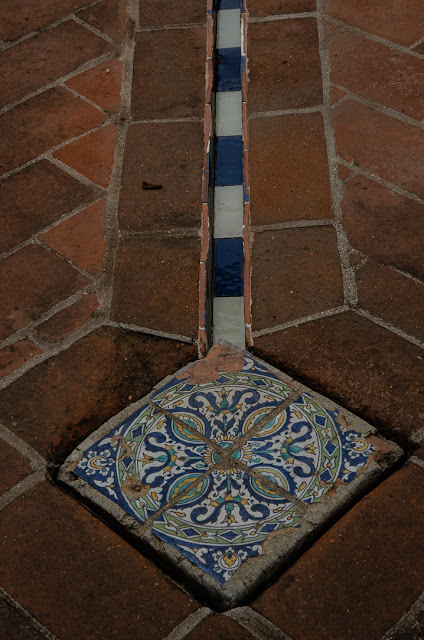 The latter part of my trip was spent in the Morro Bay area and I made a brief stop at Mission San Luis Obispo to see what there might be in their gardens. 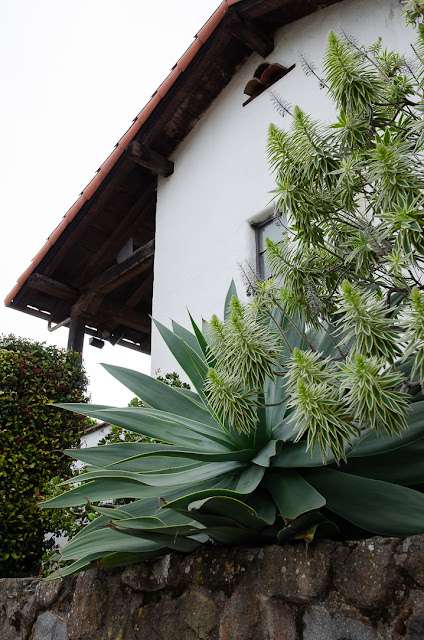 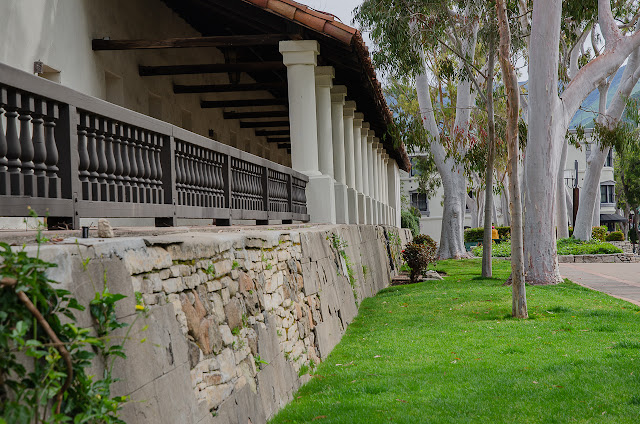 The garden itself was in a small courtyard and featured a couple of nice succulent vignettes , mixed in with those plants  that are common to public landscapes. 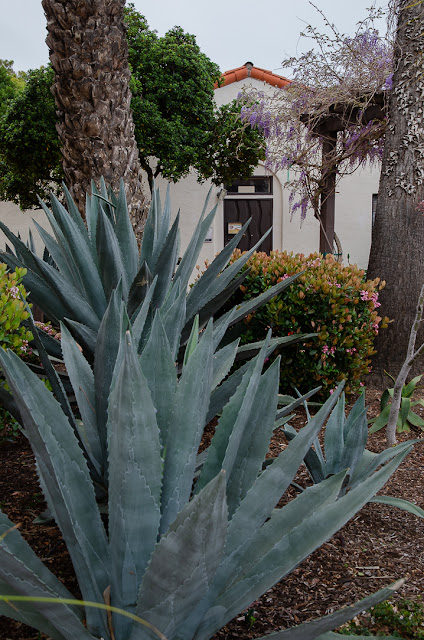 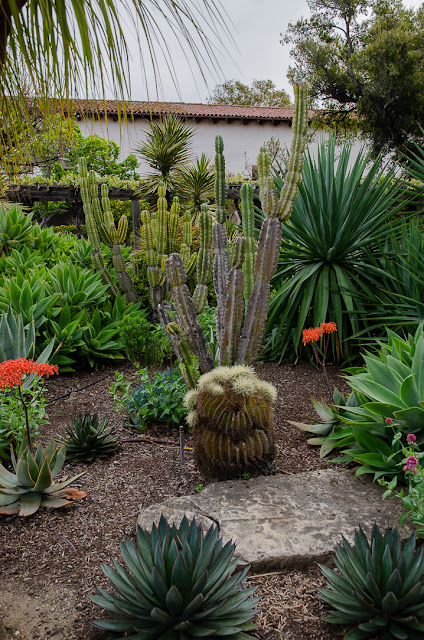 I'm staying home now until Garden Bloggers Fling takes me to Denver in June. I have plenty to do in my own garden and there are some local Garden Conservancy tours that will tide me over til Fling. 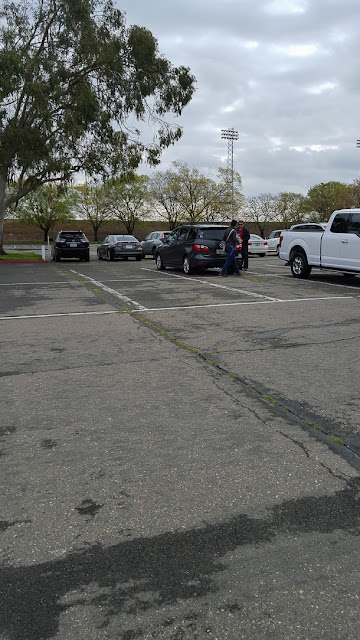